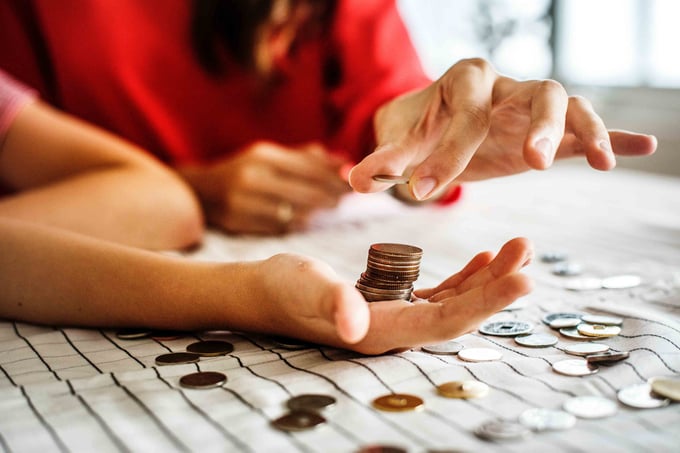 If Singaporeans took time to consider their personal loan options, they could collectively save over S$500 million on interest payments annually.

Singaporeans are big credit card fans – and an improving economy means consumers are swiping plastic more frequently than ever. But beneath this exuberance lurks the risk of escalating debt, which can have dire consequences for individuals and families. Credit card debt has been inching up, but how big is the problem and how much of a risk does it pose? What should borrowers be taking note of when it comes to managing credit card debt?

Credit card debt on the rise

The Monetary Authority of Singapore (MAS) introduced new rules to curb unsecured borrowing in 2013, as part of efforts to put a lid on rising household debt. Among other safeguards, an industry-wide borrowing limit was introduced in June 2015. Under this rule, financial institutions are not allowed to extend further unsecured credit – which includes credit cards – to borrowers whose debts exceed a prevailing limit. This limit is being phased in over four years – starting with 24 times a borrower’s monthly income from June 2015, to 18 times from June 2017, and 12 times from June 2019.

These regulations helped lower total debt among Singapore households. Growth in outstanding credit card balances moderated from a peak of 14 per cent year-on-year in the second quarter of 2012, to an average of 2.6 per cent in the first nine months of 2017, data from Credit Bureau Singapore (CBS) showed[1].

The MAS noted in its November 2017 Financial Stability Review[3] that there are still “a number of borrowers who are increasing their level of indebtedness above 12 times their monthly income”.

Why is credit card debt climbing? What are the risks?

Consumers accumulate credit card debt for a variety of reasons, including spending above their means, bouts of unemployment and paying for essentials. Data has shown that Singaporeans are increasingly reliant on their credit cards. Monthly billings per card hovered between S$300 to S$400 from the mid-1990s to early-2010s, but have started rising above $S400 in recent years[1]. In May 2018, monthly billings per card amounted to about S$555, after reaching S$514 in April and S$537 in March. 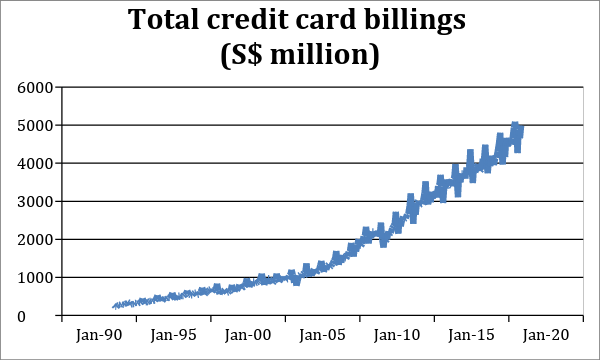 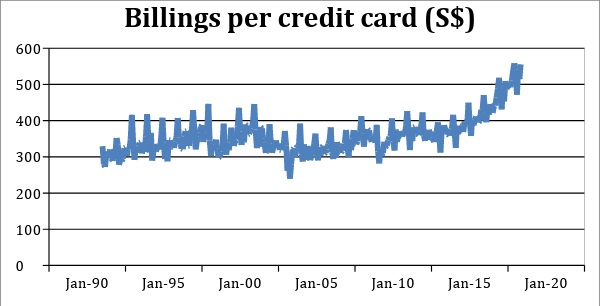 Even as consumers spend more on credit cards, interest rates are also rising – making it tougher for some to meet their repayment obligations. Interest rates in Singapore are highly correlated with global rates -- the Fed’s latest rate hike announcement in June 2018 sent the three-month Sibor, or Singapore inter-bank offered rate, used to price home loans – to its highest level since 2008. Credit card interest rates are also rising in tandem with these broader increases, making it more expensive to borrow.

1. Pay credit card bills on time and in full

Credit card borrowing is extremely high-stakes - interest rates are astronomical at over 26 per cent a year. Rollover balances also incur late-payment charges that are tagged on to the outstanding principal, further magnifying the amount owed. As a result, credit card debt can snowball very quickly - which means being a revolver can be very expensive. Clearly, the most effective way to avoid falling into credit card debt is to pay off balances promptly and in full.

There is no magic number for the number of credit cards a person should have – it depends on spending behaviour, financial goals and personal money management.

A consumer who pays off balances in full and on time every month can consider having multiple cards to take full advantage of benefits such as cashback, frequent flyer miles and discounts. However, holding more cards also means greater potential for racking up debt.

Besides limiting your borrowing, fewer credit cards also means fewer bills to keep track of each month – which makes it easier to stay on top of credit card payments and avoid incurring late fees or interest.

3. Switch to a personal loan

Personal loans can be used to consolidate credit card debt into one account, as long as you stay within your borrowing limit. This cuts back the number of bills to pay and keep track of every month. Instead, a personal loan allows borrowers to pay a fixed amount monthly.

There are four main types of personal loans available in Singapore.

The second type is a credit line, which allows borrowers to draw money when needed and pay interest only on the amount borrowed.

And finally, debt consolidation plans consolidate all your open unsecured credit under one umbrella, for debt over 12x your monthly salary.

According to 2017 data from the Department of Statistics Singapore, Singaporeans have a total outstanding debt of S$70 billion on credit cards and personal loans. But if each borrower took time to consider their personal loan options, Singaporeans could collectively save over S$500 million on interest payments annually (assuming S$23.5 billion in personal loan debt and an interest rate of 3.88 per cent per annum).

However, before applying for another loan, any borrower should consider identifying and tackling the root cause of their debt through financial re-evaluation or lifestyle change. Ultimately, borrowers need to do their research and make sure personal loans are financially viable for them.

Isaac thinks life is what happens in between football matches. He is a born again dog lover who thinks cats are overrated. Having tried his hand at multiple vocations, he holds the same opinion about hard work. Till he can figure a way to beat the system, he relies on whiskey to get by.

Isaac thinks life is what happens in between football matches. He is a born again dog lover who thinks cats are overrated. Having tried his hand at multiple vocations, he holds the same opinion about hard work. Till he can figure a way to beat the system, he relies on whiskey to get by. Thinking of Taking on Additional Debt? 6 Things to Ask Yourself First

Best Personal Loans To Ease Your Cash Flow In Singapore (2022) 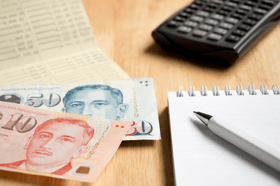 How to Calculate EMI for Personal Loans?