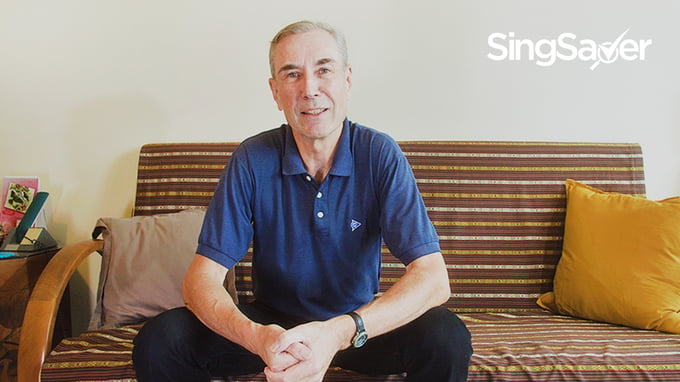 You’d think a man who hasn’t worked a 9-to-5 job in over 30 years, and lives pretty comfortably, has always had it all. That he would’ve been born with a silver spoon, right? Wrong.

Meet Morten Strange, a respected Danish financial analyst and author based in Singapore, who retired at the young age of 33. Let that number sink in. Morten quit his job as an oil rig worker in 1986 to officially retire at an age when most of us start to peak at our career. And waaaay before the FIRE movement took off and became a trend.

Yet, in the last 33 years, despite not having a regular salary, Morten has:

So just how did he do it? Read on.

We meet the proud permanent resident of Singapore in his quaint, spacious condo filled with artefacts from around the world. There’s a sense of nostalgia and story in each corner. A lot like his own life.

“I imagine it is easier to become financially free if you are born with a silver spoon in your mouth and have a fancy university degree, but I had none of those when I grew up. I was born in a two-room apartment in Copenhagen and my parents were pretty poor,” he recalls.

There’s no mistaking that Morten learnt a thing or two about money quite early in life. As an economics student at university, he developed an interest in photography as a source of income. “I never borrowed money and left university after two years to work instead,” he tells us.

As he potters around the kitchen to get us coffee and spreads out the plates on the table for a quick brunch of takeaway dumplings, you see glimpses of a self-made man. Through the 70s, he’s worked on a farm in Alberta in Canada, hiked across northern Alaska to photograph birds, participated in national service in the military – all before he landed a job on the oil rigs in the North Sea.

“I always carried a small camera with me – my Rollei 35 – and I took photos on the rigs, which I sold to magazines and book publishers to augment my working-class income. I worked hard during those years and spent most of my money buying shares and bonds,” he says.

By the time Morten was 27, he had already ticked off a checklist that would be any working professional’s envy: “A nice two-storey house near the beach in England and a Ford Mustang V8 in the driveway. But I thought there has to be more to life than this,” he muses.

In 1980, Morten decided to quit his job and move to Singapore with another job before the year was over. Through most of his time here in the early 80s, Morten worked on oil rigs across South-east Asia including Malaysia, Indonesia, Thailand and the Philippines.

By 1986, he had saved up enough money – S$400,000 – and figured he could generate enough passive income through his investments to sustain his lifestyle. Interesting fact: Latest reports suggest that entry level positions at oil rigs can typically earn you between S$70,000-S$110,000 per annum. Trades, technical and professional positions can make anywhere between S$96,000-S$305,000 per annum.

“At the time, you could retire on just around S$400,000 if you were financially savvy. I invested in Danish Kroner mortgage-linked bonds that paid on average 18-20% pa. That was enough to cover living expenses. I had some other more risky investments, but the bonds paid the rent. I calculated that I had enough to never work again in my life!” he declares.

Morten does admit that he was a bit ahead of his time and the decision might have been premature.

“I went back to Denmark in the 1990s to live with my family (he has 4 boys from 2 marriages) but my marriage didn’t work out in the end. In 1999, I got the chance to come back to Singapore. I started working for Ng Bee Choo (now my wife) selling nature books and products,” he says.

Singapore became home and there was no looking back. Soon after, he found himself returning to his life-long interest in economics and finance to become a certified financial analyst.

“It might sound like a paradox, but I think it helps to have a somewhat pessimistic view of the world. Personally, I never got carried away by the notion that tomorrow will always be better. So I never borrowed and I always saved. I realised fairly quickly that I didn’t really have to work a job any longer,” he says.

Given how the FIRE (Financial Independence, Retire Early) movement has caught on, it’s only natural to ask Morten about how he actually makes any money.

“In my time, interest rates were very high and I poured almost all my savings into mortgage-backed fixed income products that paid 18-22% per annum; none ever defaulted. As you can easily work out, if you get a guaranteed 20% return on your investments, you don’t need much to have a decent yearly passive income,” he explains.

Morten strictly believes that the FIRE movement is not an either-or outcome.

“As soon as you start to work, accumulate some ‘I quit’ money. Then build on that and make it grow until your passive income can cover your basic necessities such as rent and food. When you are getting close and have a bit of extra capital on top of that, try to quit your job and see what happens. Of course, only if you don’t like what you do,” he advises.

In Singapore, most people realize that to join the FIRE movement, you have to make a lot of money. They get that right, Morten says.

“You do need to obtain marketable qualifications to make some money. While you work, you don’t spend. But just as important is to spend (much) less that you make, and this might be a bit hard for some. Do you really need that big car and big house, if a small one will do? Or that latest smartphone if the old one is actually okay?”

“I personally think CPF is an excellent retirement scheme: what you put in is what you get out, and the 4% pa interest on your Special Account is pretty generous these days with 1.5% CPI inflation. With the CPF system in Singapore guaranteeing you comfort at a very old age, you can afford a bit more risk with your free capital,” Morten advises. He also advises would-be investors to be hands-on when investing their money instead of relying on fund managers or stock brokers.

“In general, you are better off managing your money and your risks yourself, learn how!”

While most of us flounder about where to start when thinking of early retirement, Morten made life choices to make it happen.

“Warren Buffett says that to do well you have to own either a building, a farm or a productive business. All those investments generate cash-flow. We don’t have many farms in Singapore, but we have a lot of buildings and REITS listed on SGX, we also have many successful businesses that generate good earnings, this is where you should look to grow your money. Start by putting a small portion of your nest egg (say 10-15%) into more risky ventures such as crypto currencies or maybe start-up tech companies with growth potential,” he explains.

He pauses to ponder before making a point.

“Just don’t gamble on zero-sum outcomes such as casinos, 4D lottery, football games or binary investment products. If you keep gambling, you will ALWAYS lose ALL your money –  that is all there is to it, the numbers don’t lie – so you have to understand the difference between gambling and risk-taking.”

Frugal living to the fullest

“I have a modest home, I rarely buy anything new, our car is 12 years old. My apartment is paid off long ago, I have no debt, and I only have one child to take care of now."

“In Singapore, education is virtually free, and eating out and public transport are all very cheap,” he quips in his trademark polite manner.

Incredibly enough, Morten has owned five properties over the years and made money from them: 2 in Denmark, 1 in the UK and 2 in Singapore. He now owns only one fully paid-up apartment in Singapore where he currently resides with his wife and son.

“I used to have another condo here as an investment property, but I sold it off and bought REIT shares instead for the income and exposure to the property market. I advise people to own their own home, but personally I find owning a rental property a lot of trouble. I prefer to collect dividends from shares instead,” he divulges as a helpful reminder for new home buyers.

Morten also takes a vehement contrarian stand that living in Singapore can be quite inexpensive.

“A ticket to the cinema is $4.50 for senior citizens my age and a bus to Orchard Road is only 89 cents! I spend around $2,000 per month in utilities and meals, and I mainly pay in cash when I am out. I try to travel only once a year but because I used to travel every month for work earlier, I am sick and tired of it now,” he confesses.

Living frugally also takes a lot of sacrifice, as I mentally take note of his Samsung 3G – not the latest smartphone or gadget for him. Even his desktop is a 10+ years-old LG. Morten clearly likes his things functional. But there’s also a twinge of delight when he speaks of old, forgotten things – like the gorgeous butter knife he shows me with a flourish: “I inherited it from my grandmother. Isn’t it beautiful?”

Looking back at the decision to retire at 33, what he didn’t anticipate was having to go through an expensive divorce a few years later.

“But these things happen, I guess,” he shrugs. “Luckily I stayed relevant, turned my passion for nature and photography into a source of income. I have never worked in an industry again, and I’ve always been able to do things I loved. My dividend income sees me through now. I just try to stay active and engaged for fun,” he smiles.

His airy living room sees a weak sun filtering in as we begin to wrap up. His youngest son has come back from school and I ask him if they have plans for the evening. He informs me that he goes for a swim on most evenings, but his days are not rigidly planned. I’m almost giddy with wonder at the life he's built by living life on his own terms and refusing to be part of the inexorable rat race.

Honestly, it’s pretty close to what a perfect life looks like.

Read these next:
Retirement Age: What’s The “Correct” Age to Retire in Singapore?
Have a More Comfortable Retirement Through Tax Optimisation: SRS
3 Myths About Retirement Planning in Singapore (And Why They’re Wrong)
Pros and Cons of Having A Supplementary Retirement Scheme (SRS) Account

A good book, a clean home, and new leaves in an old plant spark immense joy for Jayeeta. She loves thrift shopping, recycling, and day-dreaming about travels yet to be planned.