When is an “Amenity” Not Really an Amenity? 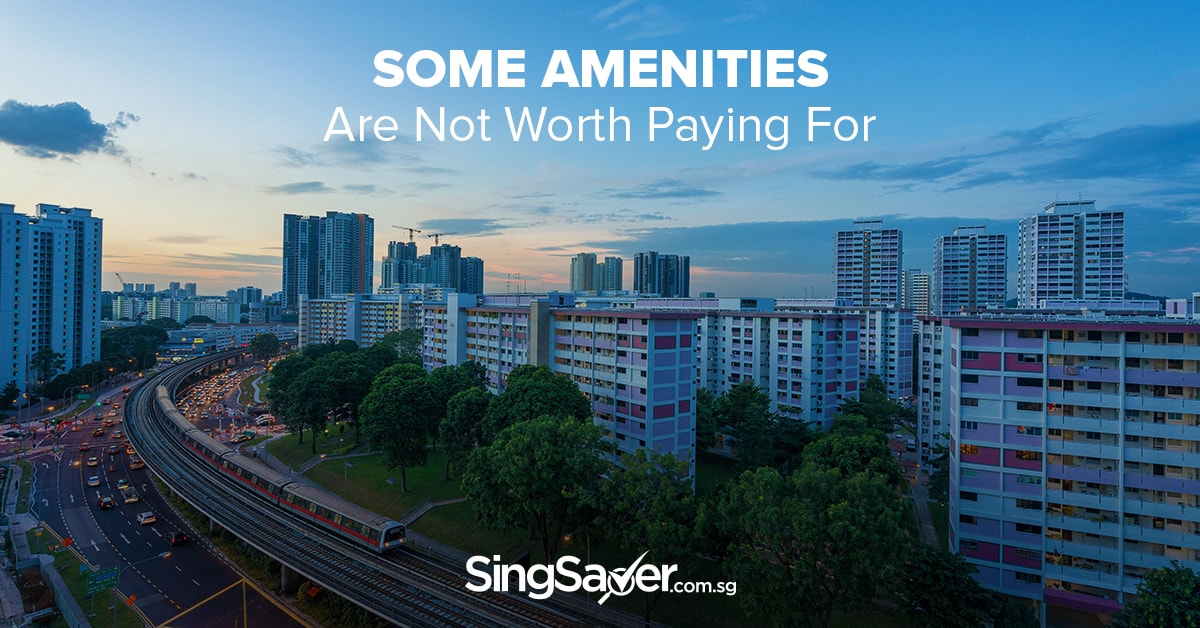 When buying a property in Singapore, think twice before paying a premium for amenities.

“Amenity” is the most overused term in Singapore’s property market. It is a generic, catch-all term to suggest there are various conveniences around you.

However, it’s important to get down to specifics. There are times when the so-called amenities are just a big money sink, and make no difference to your life.

When “Amenities” Are Not Really Amenities At All

What are the common amenities touted when trying to sell you a flat? We’ve made a list below. Do take note of how, depending on your situation, these amenities may no longer be worth paying for.

1. Nearby MRT Station or Interchange

These amounts may seem small, but consider that a six per cent premium on a S$1.2 million condo is $72,000.

Now most people would agree proximity to an MRT station is important. But do consider that MRT stations are opening almost everywhere. There are 102 stations in operation, with around another 48 due to open by 2024. Pretty soon, this “amenity” will be so commonplace, you won’t get the same kind of premium when you resell (ask your parents; having a bus stop nearby used to be a big deal. Today few people care!)

Also, do ponder if these “amenities” are relevant when you work nearby, or drive. If it’s just a 10 to 15 minute walk to the office (or you drive there), is it worth paying the hefty premium?

Likewise, having the train station nearby (if you don’t use it to get to work) just shaves a few minutes off your trip to town; Singapore is not that huge. But if you are the sort who shops online and doesn’t leave the neighbourhood often, then is the train station really such a big deal?

Many properties tout the abundance of nearby eateries. But this is too generic to be useful. You need to see the eateries yourself, and decide if they really are amenities.

If you’re on a tight budget, you have no use for 20 nearby restaurants, all of which charge S$35 per head. Those “amenities” may as well not exist.

Likewise, if you loathe having to eat in hawker centres (we know some people dislike the noise and crowds), it also ceases to be an amenity.

Do take a moment to think how often you’ll actually eat in these places!

This is often used to advertise areas like Holland Village or Orchard Road. In fact, it’s practically synonymous with more upscale developments. Before you assume it will be fun to live there, know that many Singaporeans have come to regret it. Not only do they not enjoy these “amenities”, they come to loathe them.

Before you rent or buy, scout out these areas by night. Make sure that you actually enjoy the kind of entertainment available, and that it won’t induce any migraines.

Having a mall nearby is often a major draw when buying or renting. After all, everything you need is right next door! But before you jump at this, consider if it’s worth the premium you’ll pay.

Most malls have a particular anchor tenant. When it comes to servicing nearby residences, the key one is a supermarket. When the anchor tenant is Cold Storage, Sheng Siong, Giant, and so forth, you can seldom go wrong.

However, some malls may have themes that don’t particularly fit with your lifestyle. For example, there are some malls that focus on high-end designer labels, or sports. You may find your retail “amenity” has nothing you’ll ever buy, and you’re still taking the train to town every other day.

The other issue with malls is dealing with crowds. Residents near Serangoon Nex can probably attest to this. While most of them enjoy having a mall close by, a fair number grumble about the extent of the noise pollution that they deal with right after 6 pm.

Make sure the mall crowd is not bothersome to you; and if none of the retail caters to you, don’t consider it an amenity to pay for.

Investors should worry about amenities, as it affects who they market the property to when renting it out. They will also be concerned with the potential for property appreciation. As a homeowner or tenant, however, your perspective should be different.

Make sure the advertised amenities are actually relevant to you because you’re paying a premium for them. Sometimes, an isolated property is a better and more affordable choice for your lifestyle.

Who Should Buy an Executive Condominium?
What Type of HDB Flats Can Single Singaporeans Buy?