Money Mysteries: Why do Bond Values Fluctuate if They are Supposed to be “Fixed Income”? 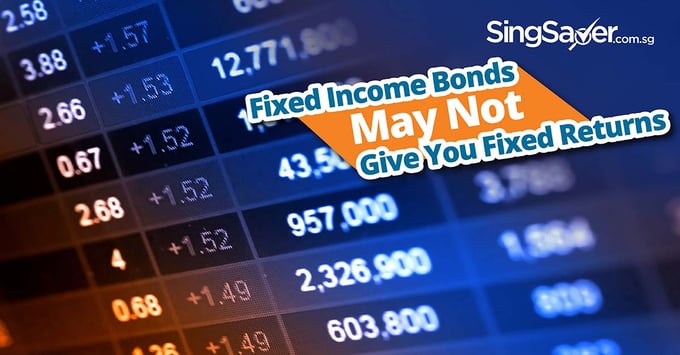 "Fixed-income" bonds sound like they promise steady returns, but a number of factors mean bond values can fluctuate.

A common question, especially among investors in bond funds, is “how can a bond’s value change?” After all, a common assurance - by the person selling such products - is that bonds are “fixed income”. Here’s what’s really going on.

What Does “Fixed” Really Mean?

Bonds really are “fixed”, in that the face value and terms of the coupon don’t change. However, the price of a bond, when it’s resold on a secondary market, can change. Likewise, the yield of a bond is also subject to change.

Here’s an analogy that may help:

However, the real life situation around that S$10 can change its value. For example, if the rate of inflation were to rise rapidly over the next five years, the S$10 would - in the year 2022 - buy you less than S$10 worth of goods (compared to today). The number on the note may be fixed, but its value has changed due to the circumstances surrounding it.

Let’s look at how this works with regard to bonds.

Par Value and Price: A Common Point of Confusion

Many lay investors get confused between the par value of a bond, and the price of a bond. They are different things.

However, the price of a bond is not the par value. Rather, it reflects what someone will pay for the bond. Here’s an example of how that might change:

Say you buy a corporate bond from Company XYZ. This bond has a par value of S$50,000, and matures in 20 years. It has a coupon (interest rate) of five per cent per annum.

Let’s say that, when you initially buy the bond, the price is the same as the par value.

About five years down the road, you decide you you need your money back, and you can’t wait another 15 years. You then decide to sell the bond.

However, during this time, interest rates have rise in the market. Company XYZ is issuing a new round of corporate bonds, with a coupon rate of six per cent per annum.

Now, would someone want to buy your bond? After all, your bond has a rate of just five per cent per annum, whereas they can get now get a similar bond at a higher rate of six per cent.

The answer is, they might still buy your bond, because it represents a shorter wait till maturity (your bond is already five years in). However, they will buy it at below the par value - for example, they might buy it off you at S$45,000 - as your bond has a lower interest rate.

In this way, the par value of a bond and the actual bond price can be different. This is also why, when interest rates rise, bond values tend to fall. (The inverse is also true.)

To add to this, some companies issue bonds that are sold below their par value at the very start. These are called deep discount, or zero-coupon bonds. An example would be a bond for S$50,000 that matures in 10 years, but which is sold at just S$40,000. The catch is that there’s no coupon at all. There are no semi-annual or annual payouts - the bondholder only profits from the difference once the bond matures.

So to be clear, the numbers on the bond - such as the par value and coupon - are indeed fixed and unchanging. When you hear about “bond values fluctuating”, what’s being discussed is the price of bonds.

A bond fund is different from a bond. When you buy units in a bond fund, you are not directly buying a bond at all.

Rather, your money is pooled with many other investors. The money is then used to buy and sell bonds to earn returns, under the direction of a fund manager (that’s what the fund’s expense ratio is for - you’re paying for that fund manager). Your number of “units” in the fund reflects your cut of the profits.

Some Bonds Have Variable Coupons

Vanilla bonds have a simple, fixed coupon (e.g. five per cent per annum). However, some bonds have coupons that pay variable amounts.

One example is the Singapore Savings Bond (SSB). The SSB has a coupon that steps up every year - the longer you hold the bond, the higher the coupon becomes. If you hold the bond to maturity (10 years), your eventual return will be as if you had gotten a coupon of 2.6 per cent per annum.

Note the words “as if”. You are not actually getting a coupon of 2.6 per cent - the coupon on the fifth year, for instance, may only be around one per cent per annum.

Likewise, some types of bonds - such as inflation linked bonds - pay out a coupon that mirrors the rate of inflation. This amount can change every year.

Admittedly, the term “fixed income” is a little misleading when applied to these types of bonds - but they are still loosely referred to as fixed income securities, as a reference to the way they guarantee an income stream (as opposed to stocks, where dividends may or may not be paid out).

Bond Yields are Often Confused with the Coupon

The coupon designates the fixed amount of interest a bond will give you. However, when your financial adviser or wealth manager talks about the bond yield, they are not referring to the coupon.

They are most commonly referring to the bond’s Yield-to-Maturity (YTM). This is a measure of the actual returns you’re getting, for buying that particular bond. Unlike the coupon, the yield of a bond will change as it moves toward maturity.

For example, say you buy a bond with a par value of S$10,000, that is going to mature in six years. The coupon is five per cent. The bond is sold to you for S$9,200 (remember: the par value is not the same as the price. See above).

What is the return that you’ll make on this bond? The answer is 6.61 per cent.

We'll spare you the actual formula we used to arrive at the answer. But if you don't mind getting gnarly with numbers, you can use an online YTM calculator to get your own results.

The reason your financial adviser gives you the yield, rather than just stating the coupon, is so you can make comparisons with other investments. For example, at a yield of 6.61 per cent, you know this bond compares favourably with, say, an endowment policy (returns of around three to four per cent per annum).

You can also determine that you’re adequately rewarded for taking the risk, as 6.61 per cent is substantially higher than the risk-free CPF rate of 2.5 per cent.

When comparing between a bond and other investments, make sure to compare the yield, not the coupon.

The “Simplicity” of Bonds is Deceptive

Bonds are sometimes marketed as being “simpler” than stocks. We think this is deceptive - as absurd as the claim that Forex trading is “simpler” because there are only four main currency pairs.

Bonds may appear to be simpler, but they require just as much research and knowledge as any other form of investment. It’s not as straightforward as looking for AAA ratings, and picking the highest coupon.

Be sure to get guidance from qualified wealth managers before buying bonds.

How Gyms in Singapore Secretly Depend on Your Lack of Willpower