Column: Why Are So Many Singaporeans Buying Bonds That Never Mature? 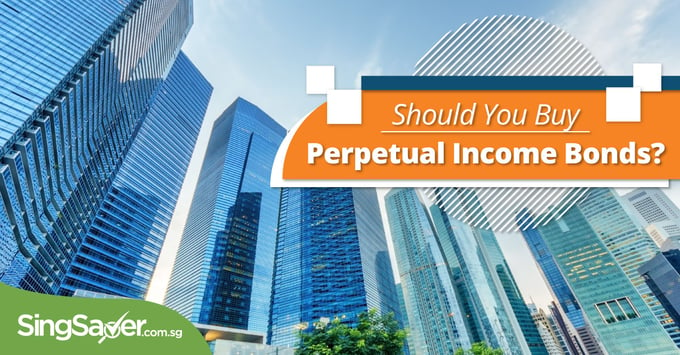 Perpetual Income Bonds may never mature and could strand Singaporeans with fixed payouts that are eroded by inflation.

When you buy a bond, you’re effectively lending money to a company. At the maturity date, you’re supposed to be paid back. But what if we told you there’s a type of bond that never matures? It might seem ridiculous, but plenty of Singaporeans have started to consider it a serious investment. Here’s what’s going on.

How Do Bonds Work?

There are different kinds of bonds, but we’ll look at the simplest type, called the vanilla bond. These are the types of bonds most available to the average Singaporean.

When a company or government issues a bond, they are essentially trying to borrow money. The bond has a par value and a maturity date - these determine how much is being borrowed (the principal), and when it will be repaid.

Of course, no one lends money for nothing. So the bond also has a coupon - this is an interest rate, paid on the amount borrowed. The reason why they’re called coupons is that, in the distant past, they were literally coupons torn from the bond certificate, and redeemed for cash (we don’t do this anymore, everything is now digital).

*Note that the bond’s price is not the same as its par value. A bond can be sold for below its par value (discount bond), or above its par value (premium bond). There are good reasons for that, but we don’t have room to address it in this article.

But Singaporeans have started to like a new type of bond which never matures.

A variant on the traditional bond is the Perpetual Income Bond (called Perps for short). Perps operate just like vanilla bonds, with one difference: there’s no maturity date.

For example, say you buy a Perp with a par value of S$10,000, and an attractive coupon rate of seven per cent. You would then get S$700 a month, until the bond issuer decides to repay the principal (which may not occur within your lifetime).

Now if you’re financially savvy, you may have spotted some serious problems here. For one, you may never get back the principal you paid. And for another, S$700 may be decent for now, but it will be worth a lot less in, say, the year 2037 than it is now.

In order to remain attractive to investors, some Perps will step up the interest rate after a given number of years. However, there's an equal chance they could choose to redeem the bonds (pay back the par value and end it) before the interest step-up rate.

The latter is why some buyers of Perps are confident they won’t really have to wait a lifetime, to see their money back.

Still though, that’s a risky assumption to make. There is nothing to compel the bond-issuer to redeem the bond and pay you back your capital. You could be stuck with a fixed payout that erodes in the face of inflation.

Perps seem to have fairly low returns compared to assets like stocks. Why would anyone want them? The main reason is that they create a predictable cash flow.

Perps, like other bonds, are a form of debt. The bond issuer - be it a government or company - is obliged to pay the coupon rate, regardless of how well or how poorly they’re doing.

Some people also see a greater degree of safety in bonds. If a company closes down, for instance, bond-holders are always paid before shareholders. But we wouldn't put too much stock in this dubious “advantage”, as it’s quite likely that bond-holders still won’t get much of their money back.

Perhaps Perps hold the biggest appeal among older investors (those aged 45 or above). As we get older, emphasis shifts from growing our money, to preserving what we have for retirement. Perps provide a more stable income source, next to stocks and shares; and the interest rate certainly beats the fixed deposits in any bank.

As for insurance policies, notice that endowment plans or investment-linked policies only project returns of three to seven per cent - they can sometimes be much lower. But a bond's coupon rate is not a projection - that’s the fixed rate of returns you can expect.

Should You Buy Perpetual Bonds?

Whether you should buy Perps or not is a question best left to your financial advisor, as everyone’s needs are different.

However, we will say this: Before you buy, do compare and consider other assets.

For example, your CPF Special Account pays out a guaranteed four per cent per annum. Seeing as to how the CPF is far less likely to shut down, this may present a better, more stable option than a Perp providing the same rate.