10 Weird Things You Can Actually Be Fined For in Singapore 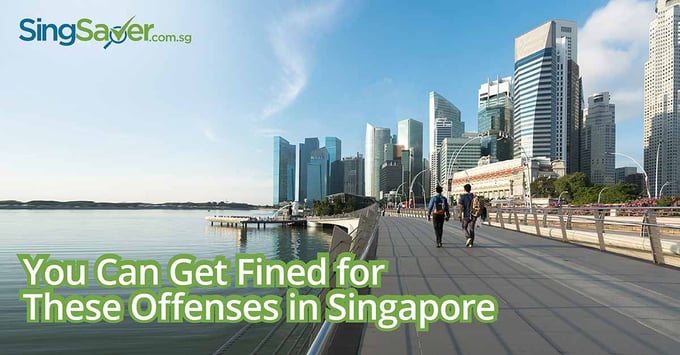 From using your neighbour’s WiFi to being naked in your own home, here are 10 weird things you can be fined for in Singapore.

Update 7 Aug 2017: A reader has pointed out it is not actually illegal to homeschool your kids. We've updated the article accordingly. Consider us schooled! :p

We love Singapore, this gorgeous, vibrant metropolis of a city with her own unique character you won’t find anywhere else.

In fact, we’re confident that if black rappers were to describe Singapore they way they do women, our fair island home would earn an echoing “Daaaayummm Singapore, you so fiiiiiine!”

Well, they would have no idea just how ‘fine’ our country is.

Here are 10 things in Singapore that could earn you a monetary penalty - but you probably wouldn’t even see them coming.

If you happen to need a fresh towel at the end of your shower, resist the temptation to go get one while naked. That’s because if anyone should see you in the buff, you can be fined up to S$2,000, or jailed up to 3 months.

Yes, according to Section 184, Part 27A of the Penal Code, you’re technically committing a crime every time you strip down to your birthday suit.

Even if you’re just sitting there playing Xbox, and not intentionally disturbing anyone, you can still be charged if that prude of a neighbour decides to complain after ‘observing you for 3 hours’. Better make sure the curtains are drawn and the doors are closed tight!

Can’t be bothered to walk that extra 20m to the traffic lights, much less wait for the green man to come on? You must be feeling burdened by all that money in your wallet then.

Even though everyone and their grandmothers do it, jaywalking in Singapore can earn you fines of between S$20 and S$1,000, and even jail time of up to 3 months. But that’s just for beginners. Repeat offenders can expect to face double the penalties.

So the next time you’re contemplating crossing the road within 50m of a designated traffic crossing (zebra crossing, traffic light, overhead bridge, etc), make sure to look both ways - for the traffic police!

So your neighbour doesn’t bother to secure their home WiFi network, and you tap it to watch Youtube every night long after you mom told you to go to bed. You brag about it on Facebook because you feel like a l33t h4xx0r! (For all you emoji kids, that’s called leet-speak.)

You know who else agrees with you? The Singapore Penal Code. Apparently, using someone else’s private WiFi network without their permission is considered an act of hacking. You can be fined up to S$10,000, or jailed up to 3 years.

If you really get thrown into jail for piggybacking on your neighbour’s WiFi, definitely exaggerate your ‘origin story’ (you were actually a top runner for that Nigerian prince), just so you don’t die of embarrassment in prison.

Being a Disney Princess in Singapore is hard.

We mean, cross-dressing in the Army is generally frowned upon; sharing a house with seven old men attracts vicious gossip; and teaching white men the lay of the land earns you nothing but judgmental blog posts. And you can’t feed forest creatures, not even by hand.

Under NParks regulations, anyone caught feeding wild animals can be fined up to S$2,000. So, we guess the world will have to go without your gritty re-telling of Journey to the West, starring a live monkey, wild boar and that fat auntie with the bad perm.

When it comes to pets, people are generally divided into dog-lovers and cat-lovers. But that’s only if you are privileged enough to live in private housing. If you’re like the rest of us HDB dwelling folks, then your choices are limited to being a dog-lover, or a bitter, pet-less person.

(Think we’re exaggerating? Try watching Netflix with your fish in your lap, or walking your turtle around the block. Let us know how that goes.)

According to HDB rules, keeping cats in your apartment isn’t allowed. And they will write you letters telling you to outright abandon your pet. If things really escalate to that level, you’d best comply, or you could be fined up to S$4,000.

In the eyes of the government, importing chewing gum is an even more serious offence than, say bringing in duty-unpaid cigarettes.

You can be fined up to S$100,000, or jailed up to 2 years if you import chewing gum without the proper paperwork and for the wrong purpose. (You’re allowed to bring in chewing gum if you’re using Singapore merely as a stopover.)

In contrast, crossing the border with duty-unpaid cigarettes will earn you between S$2,000 and S$4,000 in fines. So… it’s better to be caught with contraband cigarettes than with gum, we guess?

7. Not Sending Your Kids To School

In Singapore, every child from age 6 onwards must start receiving a proper education. Our traditional values leave no space for hippie philosophies such as letting children roam free and actually having a childhood.

So, if you're thinking of keeping your special snowflake of a child sequestered at home, (lest they grow up grey and humourless), be prepared to face up to S$5,000 in fines, and up to 12 months in jail.

But don't rush to be a martyr. The Ministry of Education provides the option for you to homeschool your kids.

8. Being In Someone’s Way

Now that Pokemon Go is enjoying somewhat of a revival, we thought this warning would be particularly timely.

The next time you’re out hunting for Articuno, mind that you don’t prevent the people around you from getting to their destinations. You could incur a fine for, well, getting in someone’s way.

To be fair, we reckon this law (like each one on this list, actually) only applies when things are such that the police needs to get involved, but plain reading sure makes it sound a little ridiculous.

From Section 339 of the Penal Code: “Whoever voluntarily obstructs any person, so as to prevent that person from proceeding in any direction in which that person has a right to proceed, is said wrongfully to restrain that person.”

You know that creep who composed a dirty ditty about your laundry, and posted a video of him singing it on Youtube? You can go ahead and call the Police on him, but maybe only if you’re ok admitting to the courts and the media your love of Trump-themed intimates. (Because you just know everyone from Straits Times to Mothership will be on the case.)

The law is very clear on this one: Singing (or reciting, or uttering) any songs with obscene content in or near any public place can earn the perpetrator a fine, along with up to 3 month’s jail time.

Although, we wonder who will be judged more harshly in the court of public opinion.

10. Bringing Alcohol into A Public Hospital

With the birth of her latest child, your sister has unlocked the highest tier of baby bonus cash gift. A truly Singaporean feat worth celebrating.

But before you trundle that oversized hamper into her ward, you might want to remove that bottle of XO taped to the top of the pile. Bringing drinking alcohol into a hospital in Singapore is an offence that carries a fine of up to S$1,000.

And to add insult to injury, your offending bottle of very expensive Very Special Old Pale will be confiscated.

Can You Afford to Retire at Age 50?