5 Unexpected Things That Affect Your Ability to Save Money 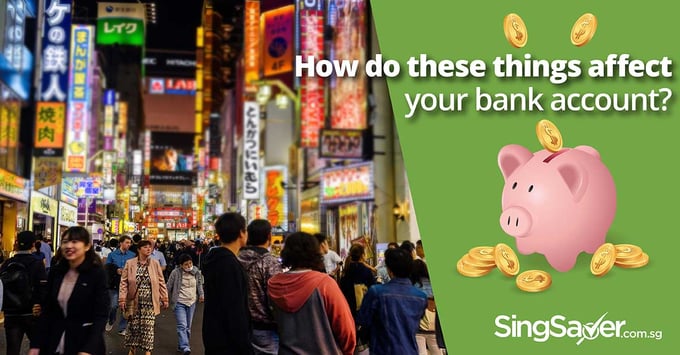 Even something as innocent as the language you use can mean the difference between success and failure in sticking to your budget.

We all begin a budget with conviction; but at some point, it all slips away. Have you ever wondered why, exactly, it’s so hard to save money? The answer may not be as obvious as you think.

Here are some lesser known - but no less potent - causes of interference in your budgeting efforts.

1. The Language You Speak

It may seem strange, but just speaking and thinking in a particular language can impact the way you save. Behavioural economist Keith Chen was the first to point this out, as countries that speak “futureless” languages tend to be better savers.

A futureless language is one in which there are no past, present, and future tenses. For example, in English, we say “I am going to go to the park” to indicate an event in the future; this differentiates it from “I went to the park” or “I am at the park”.

In languages such as German, Mandarin, and Japanese, there’s less distinction in time between the phrases. This seems to coincide with the fact that countries where these languages are used tend to save more.

It’s theorised that, when you don’t mentally isolate the future as a “faraway place”,  the concept of saving money feels less abstract.

If you’re bilingual, you could try thinking of personal finance in another, “futureless” language - that could make you more inclined to save.

2. Your Lack of sleep

Lack of sleep can affect your ability to save. That’s because, when you’re sleep deprived, your brain leans toward making riskier and more impulsive decisions.

The other effect of sleep deprivation is loss of willpower. Without rest, you’ll have less mental stamina to resist your impulses. We tend to give in to temptation - such as to eat out rather than prepare dinner; or to buy several single serves instead of waiting for a mark-down on family-size servings - when we’re tired.

The final way that lack of sleep affects you is tardiness: when you wake up late, you’re more likely to need private transport (or a private hire car or cab) to get the work, as opposed to saving money by using public transport.

3. You Conflate Thrift With Saving

This is one of the most common complaints: you eat cheap, cut transport costs, and buy only when there’s a discount. You’re thrifty. And yet, your savings don’t seem to be getting any better. Why is that?

The reason is a common mental pitfall, in which we conflate thrift with savings. For example: when you use a promo code to pay S$10 less for a Grab ride, have you saved S$10?

The practical answer is no. It should only count as savings if you then take that S$10, and put it in a separate bank account. Otherwise, you’re just getting more stuff for your money (i.e. you spend it on something else afterwards).

Thrift does help to cut costs, and it’s a precursor to saving - but it’s not actually saving until you’ve put it in the bank.

4. You Dress Down Too Often

It’s an ugly stereotype: the person who wears shorts and singlets, and has stains on his clothes, is assumed to be worse with money than a sharp, well dressed businessman in a suit.

But sometimes, there’s a bit of truth to the stereotype. Studies have shown that dressing well boosts your confidence and self-esteem. More importantly, the study shows that when you’re dressed as a person who’s in charge you improve your abstract thinking skills.

That is, you’re better able to predict the impact of your purchases, and weigh prices in a rational manner. You’re less likely to fall for a slick marketing campaign, and tap into money you intended to save

So the next time you need to make a big financial decision, go in looking like someone who’s competent and about to make a crucial choice. That should get you in “boss mode”, and you’ll be less laid-back about spending.

5. Your Feelings of Insecurity

When you feel insecure about something, or you lack self-esteem, you’re more driven to spend. While psychologists haven’t been able to determine the exact reason, it boils down to two possibilities:

The first is you spend money to “buy” security. For example, say you’re stressed out about your job performance, because you boss just yelled at you. This might unexpectedly cause you to spend more on food, even to the point of overeating; that’s because your body’s primitive survival instinct is triggered. It’s trying to hoard energy for the looming crisis, which your brain insists is now happening.

The second possibility is simple distraction. The process of buying new goods gives you an emotional “high”, so you forget about your worries. This escape is addictive, and you spend more and more on “retail therapy” to avoid dealing with your problems.

The key is to find an alternative (preferably free) outlet, such as swimming, playing music, painting, etc. This will take the edge off the situation, without you having to “spend” your problems away.

6 Situations When Shipping Back Your Purchases Could Save You Money

Why Your Car Loan Interest is Secretly Double What it Seems