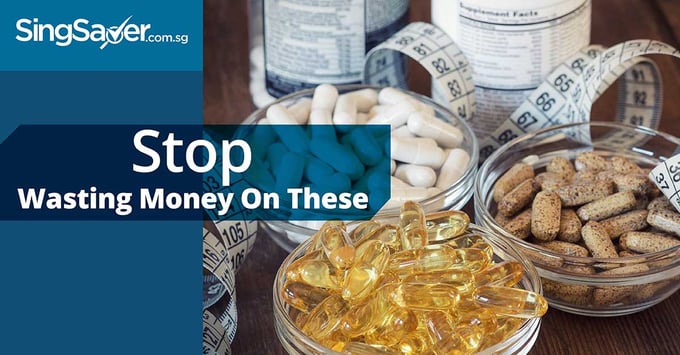 We all have impulse purchases, which we make without thinking. If we learn to control these, we would have much more cash to spend on the things that we do care about. The following items aren’t really things that we love; they’re the habitual, money-wasting purchases that we should weed out.

Singapore is currently suffering from a S$134 million bottled water addiction. This is mostly because (1) we don’t like to carry water bottles, and (2) we consider it disgusting to drink from a public tap, especially when most of them are in public toilets.

That causes us to end up spending S$1 to S$1.20 for bottled water, which is no different from tap water.

But while S$1 may not seem like much, consider that a rising number of Singaporeans buy a bottle of water as often as twice a day. That comes to around S$60 a month, or about S$730 a year. That’s enough to fund a weekend family getaway to a nearby country.

Medical studies have shown that multivitamins (and related vitamin supplements) do virtually nothing for your body. Even worse, some could be dangerous.

In the United States, which has largely the same brands of vitamin supplements we do, studies of 54,000 different brands showed that only a third of them had any sort of safety standards. 12 per cent of them (a stunning 6,480 brands) were actually found to be dangerous, potentially increasing the takers’ risk of disease.

Many of the claims made by vitamin brands, such as improving concentration or preventing loss of bone density, have been debunked. And as it turns out, you can’t “megaboost” the vitamins in your body by taking pills - once your body has enough of a particular vitamin, it will naturally reject any more; it doesn’t matter how many more pills you take.

Singaporeans like to buy bundled cable TV channels, just out of laziness. It’s tedious to compare prices and shows, and half the time we have access to channels that we never watch.

It’s a total waste of money, especially in an age when we have services like Netflix (just around S$15 per month).

Before you buy cable television channels, ask yourself if you’d have problems watching shows on your tablet, phone, laptop, etc. instead. If services like Netflix already have the shows you want, you may be better of skipping the cable channels.

(Some thrifty Singaporeans have even gotten rid of TV altogether, reasoning that all their favourite shows are on the Internet anyway).

Many Singaporeans are averse to thinking about interest rates, or topics like refinancing. It’s common to hear them insist they “don’t want to deal with that stuff”. It’s a pity, because they waste tremendous amounts of money that way.

For example, if you have a S$5,000 credit card debt growing at 26 per cent per annum, there’s a simple way to reduce that interest to just six per cent:

With online banking, all of this can be done in a matter of minutes; but we’re often too lazy, and thus end up paying unnecessarily high interest.

Many banks (not all) will give you fee waivers for your credit card, if you just call and request for it.

Credit card annual fees range from around S$200 to several hundreds per year - but if you repay your card reliably, and you actively make use of it, many banks may not mind processing a waiver. In fact, some of them even have a specific button for it, on the call centre support system.

(Other cards reward you with points or air miles for paying your annual fee. This is often at a superior exchange rate than normal, so you should definitely consider taking advantage of it.)

Whether you decide to pay your fees, or to get them waived, there’s no harm in spending a few minutes to make the request. At the end of the year, that S$200+ can go toward funding your Christmas and New Year gifts.

6. Travel Insurance (At the Last Minute)

Travel insurance not only protects you against accidents, it can also covers trip cancellation or postponements. However, you need to have the travel insurance plan in place before such an event.

For example, if you buy travel insurance today, and two weeks later your trip is cancelled due to natural disasters, you’ll be able to make a claim. But if you hadn’t bought the insurance yet, your trip would be cancelled, and the money paid for flight tickets and lodging would be a total write-off.

Of course, travel insurers love it when you buy at the last minute. You see, when you buy travel insurance exactly as you’re leaving, you pay for protection you don’t use - part of your premium was meant to cover you in the event of a cancelled trip.

Hence, the fiscally responsible option here is to buy travel insurance once you’ve decided to go on a trip. Consider buying an annual plan if you go for multiple trips per year.

Do you use a lot of jam or peanut butter? Or how about margarine? If your household makes regular use of these items, stop buying them on an ad hoc basis. In other words, don’t pop into the store to get a few whenever you need them.

The prices of small or single-serve packs can be up to 50 per cent higher, when compared to buying in bulk.

A good example of this is milk: the difference between 600 milliliters and a full litre can be as high as S$2.50 for some brands.

If you just buy the full litre, you’re effectively getting the fourth bottle for free, as opposed to buying the smaller bottle all the time.

That’s not forgetting the increased waste your household will be generating.

How Supermarkets Trick You Into Spending More