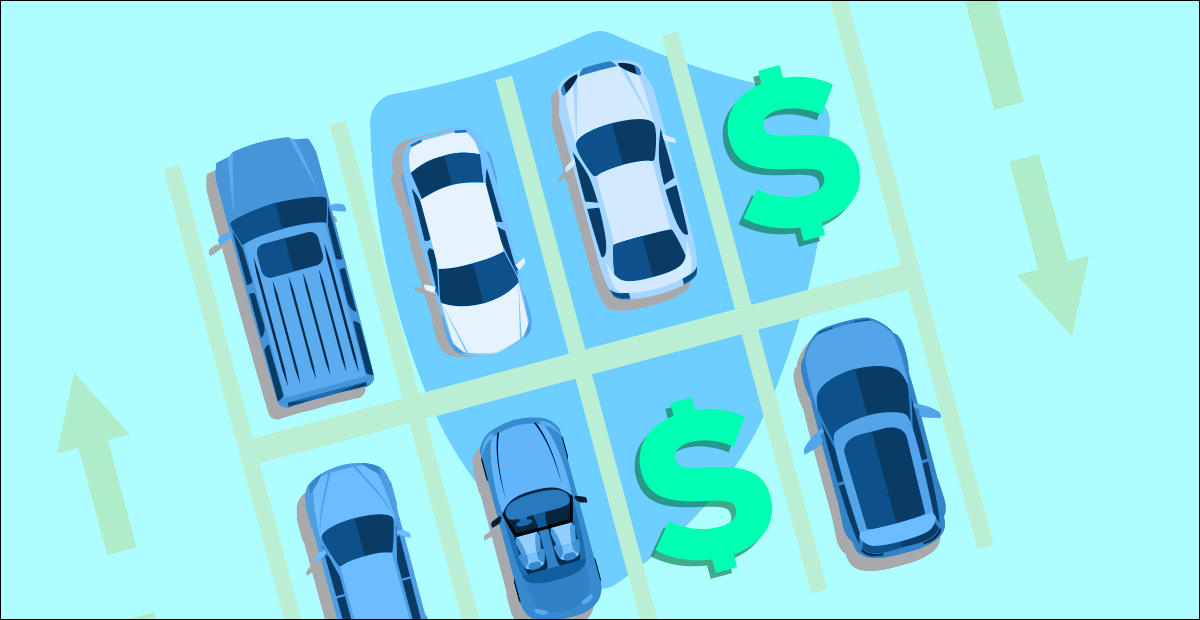 Second-hand cars are expected to become more popular as more drivers seek to escape rising car ownership costs. Here are some of the best second-hand cars to buy in Singapore, as well as some tips on what to look out for.

Buying second-hand may not be your first choice when it comes to getting a car, but with COE prices looking to remain high in the near term, it may just be the only financially prudent option.

But it’s not all bad. The thriving second-car market in Singapore – expected to achieve a compound annual growth rate (CAGR) of over 4% till 2027 – means there’s plenty of great options to pick from.

Also, Singapore has a Lemon Law on used cars, which offers a degree of protection against an unscrupulous sale. (Although, the law doesn't apply under specific circumstances, including if the deal was a direct one between buyer and seller.)

Best of all, buying a second-hand car can offer several potential benefits, including avoiding the worst of the depreciation, and a significantly lower price.

Plus, you won’t even have to go through the trouble of bidding for a new COE; you’ll simply take over what remains of the 10-year COE on the car you’re purchasing.

Convinced? Start your hunt for your next cheap(er) ride with our pick of the best second-hand cars in Singapore. 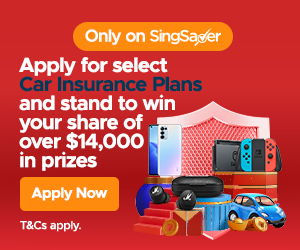 SingSaver Exclusive Car Insurance Offer: All successful applicants of any MSIG & TIQ Car Insurance products will score up to 2x entry in our SingSaver CNY Grand Lucky Draw. Stand to win your share of over S$14,000 worth of exciting prizes. Valid 31 January 2023. T&Cs apply.

Compare and purchase your car insurance through SingSaver to get the best deals and discounts for your preferred coverage!

Find the Best Car Insurance for You

When it was released in 2020, the Korean Kia Cerato quickly became a favourite for many Singaporean families. This is thanks to the model’s winning combination of spaciousness, convenient features, stylish design and economical 1.6 litre engine. In fact, some enthusiasts were so enamoured that they even declared the model the “Most Value for Money Sedan”.

This favourable proposition is only further strengthened if you can get the vehicle at less than full price – as is the case with this listing that still has a full eight years left on its COE.

Going for S$93,588 (nearly 30% less than the brand-new price, which starts at S$126,999), a second-hand Kia Cerato offers unbeatable value for those looking for a modern family sedan easily capable of keeping up with all your needs.

For those who think that’s nothing exciting to be found on the second-hand car market, this listing will make you reconsider. Check out this Mini One 1.5A, going for under S$100,000, and with six years left on its COE to boot!

A brand new Mini One will set you back a cool S$165,888, so second-hand offers like this are just about as good a price as you can get. Yes, this is a 3-door model that caters to singles and young couples, but the diminutive chassis belies a larger-than-expected carrying capacity. Two more passengers – plus possibly a small dog – can fit in the back seat, accessible via the fold-down front seats.

In any case, if you’ve ever wanted to cooly zip about town in style without resorting to surviving on instant noodles, here’s your chance.

Another benefit of shopping for second-hand cars is the opportunity to own models that are no longer offered for sale. Such is the case with this Subaru Forester 2.0A XT, a popular and well-regarded choice among lovers of sports utility vehicles (SUVs).

Facelifted in 2016, the model is often praised for great all-round visibility, smooth handling, and decent mileage. Naturally, as a big-sized SUV, the Forester offers interior and boot space in abundance, making it ideal for family trips and passengers of all ages.

The listing we found has five years left on its COE at under S$90,000 – not too shabby considering a brand-new equivalent is going for at least S$161,800. Consider this one up if you’re looking for a family-friendly ride with a sturdy, powerful profile. 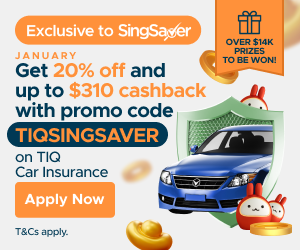 SingSaver Exclusive Promotion: Use the promo code TIQSINGSAVER to enjoy 20% off and up to S$310 via PayNow (fulfilment by Etiqa) when you apply now. Valid till 31 January 2023. T&Cs apply.

Plus, all successful applicants of any TIQ Car Insurance products will score up 1x entry in our SingSaver CNY Grand Lucky Draw. Stand to win your share of over S$14,000 worth of exciting prizes. Valid 31 January 2023. T&Cs apply.

Our next listing has many things going for it. For one, it’s a hybrid car, which means driving around in this vehicle will result in lower emission of greenhouse gases. For another, it comes with interior stylings and accessories that rival some pricier models. And for a third, this car still has a healthy 7 years and 8 months left on its COE at the time of writing.

The premium feel of the car is further enhanced by its luxurious good looks (indeed, some have noted this model to be the best-looking sedan in its class), and when you factor in the asking price of just over S$100,000, this second-hand car whispers “affordable luxury” from bonnet to tailpipe.

If you don’t mind an older model, this Honda Fit 1.3A GF – at under S$90,000 and with eight years left on its COE, no less – might be worth your consideration.

You may know the Honda Fit as that sporty Japanese hatch-back that suddenly everyone seems to be driving in the early 2000s. Since then, the model has enjoyed enduring popularity, with the Fit now in its fourth generation.

A major factor contributing to this car’s beloved status is how it offers cargo volume comparable to larger vehicles, despites its relatively compact size. This was due to the innovative seats put in by Honda, which are designed to be folded in several configurations.

Flexible, nimble and economic – thanks to its 1.3l engine – the Honda Fit is well-geared towards the needs of city dwellers.

The listings we’ve highlighted are merely examples to illustrate the potential benefits and value of shopping for a vehicle on the used car market in Singapore.

Of course, there’s no objective way to say definitively which car models are the best for second-hand purchases; what’s best for you will depend on your needs, preferences and budget.

And while there are definitely gems to be found, it’s still important to err on the side of caution. Here are some things to pay attention to when buying a second-hand car – other than the general appearance and overall state of the vehicle, that is. 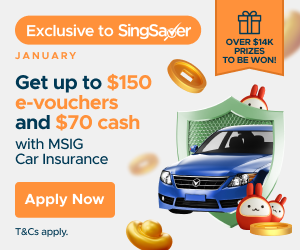 SingSaver Exclusive Promotion: Receive up to S$70 via PayNow and up to $$150 petrol vouchers when you apply now. Valid till 31 January 2023. T&Cs apply.

Returning customers who renew their MSIG Car Insurance will receive S$50 via PayNow instead. Valid till 31 March 2023. T&Cs apply

Plus, all successful applicants of any MSIG Car Insurance products will score 2x entry in our SingSaver CNY Grand Lucky Draw. Stand to win your share of over S$14,000 worth of exciting prizes. Valid 31 January 2023. T&Cs apply.

If the vehicle you’re interested in has had multiple owners – especially in a short period of time – take heed. You might be rolling the dice on a vehicle with persistent problems.

It is common for some older cars to have changed hands two or three times, especially luxury or high-end models However, a mass-market model having had four or more owners in the span of two years should be treated with suspicion.

At the very least, find out as much detail as possible about why the car has gone through so many owners, before deciding whether to proceed with the purchase.

The mileage on a car is usually a reliable gauge of its lifespan. We say usually, because, unfortunately mileage tampering isn’t unheard of in Singapore.

Mileage tampering is when an unscrupulous dealer alters the odometer readings to hide the true mileage of the car. As higher mileage causes greater wear and tear, this can stick you with a car that breaks down soon after, costing you a hefty repair bill.

As a general guide, cars in Singapore clock an average of 20,000 km per year, so if a vehicle’s odometer displays a significantly lower mileage, you should investigate further.

You should also check for mileage tampering by:

Someone trying to sell you their used car may not be the most forthcoming about a previous accident. Or may try to downplay things and hope you won’t pry further.

As such, it is a good idea to order a professional check up with organisations such as STAI or Vicom. They can better ascertain if a used-car had been involved in an accident before, the severity of the damage caused, as well as cross-reference records using the vehicles’ engine or chassis number.

This will give you a better idea of the state of the used car, and whether you should go ahead with the purchase.

Being a Safe Driver Can Save You Money. Here’s How.

How Will Your Car Modifications Impact Your Insurance Premiums?

Which Car Insurance Add-ons Are Worth Spending On?