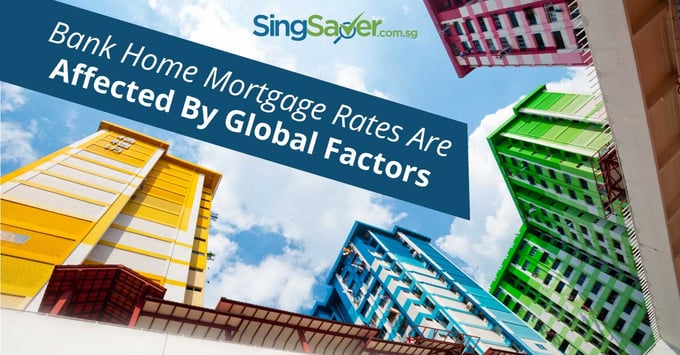 How did bank mortgage rates drop lower than HDB rates, and will they stay that way?

It’s time to address a mystery that puzzles and infuriates some Singaporeans: why do HDB loans cost more (in terms of interest rates) than bank loans? After all, HDB is supposed to be a form of public housing. The answer lies in the way home loan rates are determined.

How Much More Does An HDB Loan Cost?

A home loan from a bank, at the time of writing, will typically have an interest rate between 1.7 per cent and two per cent per annum (this is for long-winded reasons that we’ll explain below).

By contrast, an HDB Concessionary Loan - which is now ironically named - has an interest rate of 0.1 per cent above the prevailing CPF Ordinary Account (CPF OA) rate. That means at present, it’s 2.6 per cent interest.

Note that, while the CPF OA rate is technically revised every quarter, HDB loans are loosely referred to as a fixed rate. That’s because the CPF OA rate* rarely changes (the current rate hasn’t been altered since mid-1999).

This means at present, borrowers who use bank loans tend to pay an interest rate that’s anywhere from 0.6 per cent to 0.9 per cent lower. This gap was even wider in 2008 when interest rates fell to record lows, and bank rates could be cheaper by as much as 1.2 per cent.

While these numbers may seem small, remember that they do add up - home loans typically last from 25 to 30 years, and the extra interest paid can be quite significant in that time.

*For the curious, CPF OA rates are based on a weightage of 80 per cent on 12-month fixed deposit rates, and 20 per cent on the savings rates of selected major banks.

Why Are Bank Home Loans Cheaper?

A long time ago, bank loans were much more expensive than HDB loans. If you go back to the 1980s or 1990s, for example, it wasn’t uncommon to find home loan rates somewhere between 3.7 per cent to four per cent.

What changed things up was the Global Financial Crisis, which occurred in 2008/9. The aftermath of the crisis devastated the American economy, and America’s central bank (the Federal Reserve, or Fed), wanted to stimulate recovery.

One of the many ways they did this was by setting interest rates to zero (when interest rates are zero, people are more inclined to borrow and spend money, as there’s no benefit to leaving the money in the bank).

However, this low interest rates also spilled over into Singapore. To understand why, we need to know how Singapore banks decide on home loan interest rates.

How Do Banks In Singapore Decide Home Loan Interest Rates?

There are three main ways a bank sets the interest rate, when it comes to your home loan:

The SIBOR rate is, as a simple definition, the median interest rate among local banks. A home loan rate using SIBOR would be the current SIBOR rate, plus the bank’s spread.

For example, a home loan rate of (3M SIBOR + 0.72) would mean the rate is the prevailing three-month SIBOR rate (i.e. the rate is refreshed every three months), plus 0.72.

So if the prevailing SIBOR rate is 0.92, then the interest rate would be 1.64 per cent, revised every three months.

SIBOR plummeted, as a result of the Fed setting the interest rate to zero. This was one contributing reason (among many) why home prices suddenly shot up, and the government had to apply cooling measures. (Basically, the low interest on home loans encouraged more people to buy properties.)

Between 2009 and 2013, property prices in Singapore skyrocketed by almost 60 per cent. A low interest rate meant low monthly repayments, and more people could afford to buy houses. Even among HDB flat owners, some refinanced from HDB loans to bank loans (you can always do this, but you cannot change a bank loan back into an HDB loan).

This resulted in a situation where Singapore’s home loans hovered at the 1.4 per cent mark for a few years, before finally climbing again in 2016. The Fed has since announced plans to raise the interest rate back to normal, in gradual steps. Once this is complete, HDB loans may no longer be more expensive than bank loans.

For now however, bank loans remain cheaper, due to the freak events from nine years ago.

Home loans may continue to be cheaper than HDB loans for many years yet. But in the long run - such as 10 or 15 years - this may no longer be the case.

Flat owners should think carefully before choosing a bank loan; remember that in the past, rates from banks were between three to four per cent per annum. We could see a return to such high interest rates in future.

How Much Should You Spend on Insurance in Singapore?

Should You Still Choose A Bank Home Loan Over An HDB Loan?