How Your Birth Order Can Affect Your Income in Singapore 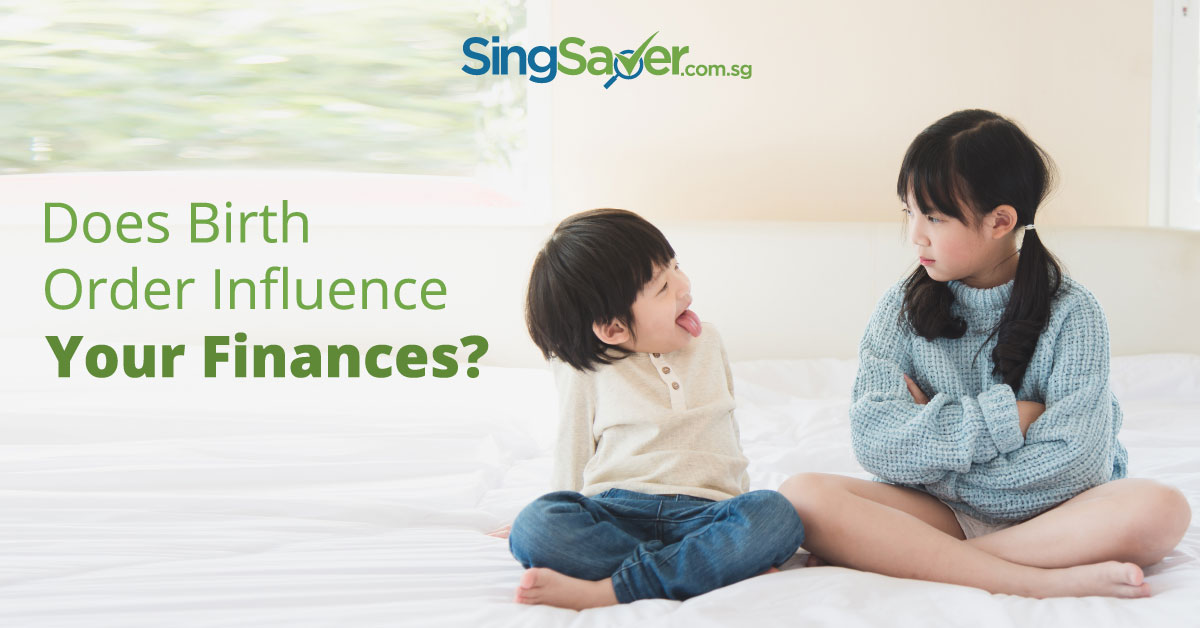 Research shows that being the eldest, youngest, middle, or only child in Singapore has an effect on your income and finances.

In psychology, there are two schools of thought about birth order. One group says it has no predictable effect on you, while the other says there are some commonalities between only children, youngest children, and so forth.

As this paper shows, research into the effect of birth order is ongoing. With every family unit being different, it’s difficult to generalise the effects of being the eldest, youngest, middle, or only child.

While we’re not experts, here’s some interesting details we gathered on birth order, and how it could affect your pocket. We’re sure many of you will find these scenarios familiar.

Only children tend to be more achievement driven, much like firstborns. However, they are often more adventurous, with a tendency to be strong-willed (read: stubborn and like having things their way).

Only children tend to do better at school, because all the family’s resources tend to concentrate on them. When you’re the only one, you get all the tuition, violin lessons, enrichment classes, and so forth. Likewise, they are more likely to go to university, as parents don’t have to choose which child to send when they’re on a budget.

As an aside, only children tend to interact more with adults than other children when they’re growing up. This has the side-effect of developing sharper language and interaction skills, which can make them look mature than their peers.

In the long run, only children may also be driven achievers because they are in a difficult situation. When their parents retire, for example, the only child is often counted on as the sole source of support. Necessity can make them more serious and financially savvy in their later years.

Only children are likely to make more money than children with siblings. This is largely because they have all the advantages their family can provide.

While only children are often saddled with more financial responsibility, this is balanced out: most also stand to inherit the entirety of their family’s wealth, with parents (and often grandparents) providing a large legacy for them.

Firstborn children tend to perform better in school. Based on studies by economists V. Joseph Hotz and Juan Pantano, the reason may just be stricter parents.

Firstborns tend to be subject to more stringent parenting (much like only children), as new parents tend to be stricter. The firstborn is the one that goes through rules such as limited hours in front of the Playstation, or having fixed study periods. Most of the time, this translates to better school results (which could lead to a better pay cheque).

Another theory states that firstborns perform better academically, because they’re often tasked with teaching and helping their younger siblings. They’re the de facto tuition teacher of the house.

Firstborn children are often more financially savvy. At a young age, they often perform tasks such as handling the change when buying groceries, or buying EZ-Link tickets for their younger siblings. Later in life, they tend to lead the charge when providing for elderly parents.

Firstborn children steal a march on their siblings. They are often the first to graduate and go looking for a job, and so build their contacts and career earlier than their siblings. While things may change later, firstborns do tend to make more money at first.

Good grades in school don’t always translate to great financial success; but it could give them a head start, with a better entry level job.

An American organisational psychologist, Ben Dattner, has pointed out that middleborn children tend to be the negotiators and peacemakers in the house. They tend to have better people skills than their siblings, and often seem closer to friends than family.

Middle children are seldom as competitive as their older siblings. Studies show they fare better in jobs where they can promote co-operation or settle disputes; they are more interested in everyone getting along than they are in “winning”.

Middle children tend to earn less than their firstborn counterparts. However, it’s due to inclination and not lack of ability. Middle children are more about being happy at work, and less about corporate ladder climbing (which can mean they’ll turn down a promotion to keep a lower paying job they like). They also tend toward jobs such as teachers and social workers, which emphasize benefits beyond money.

However, middle children can do well financially. This often occurs in those who leverage off their better developed social skills.

The youngest child is often used to being the most cared for, and parents tend to be a little less strict with the youngest. They benefit from having parents experienced in, well, parenting; and they are often more free-spirited. However, if there is a large age difference between the youngest and the eldest (e.g. 12 years or more), the youngest will often seek to emulate the eldest.

Youngest children tend to dislike confrontation, and will pick relationships where they will be supported rather than have to fight. This applies to social as well as work related issues. This may be their biggest inhibition, as they’re often less willing to argue for a raise, or challenge those who claim credit for their work.

On the other hand, youngest children tend to be the most adventurous. They are creative, and gravitate toward work in the arts and media. These are fields of work where they either become wildly successful (think movie stars and famous novelists) or struggle financially.

Unpredictable. Youngest children do tend to make less than their peers, at least right out of school. They also tend toward uncommon careers or businesses; these are the types who become social media influencers, radio DJs, or artisan potters. That can mean a lot of money, or very little.