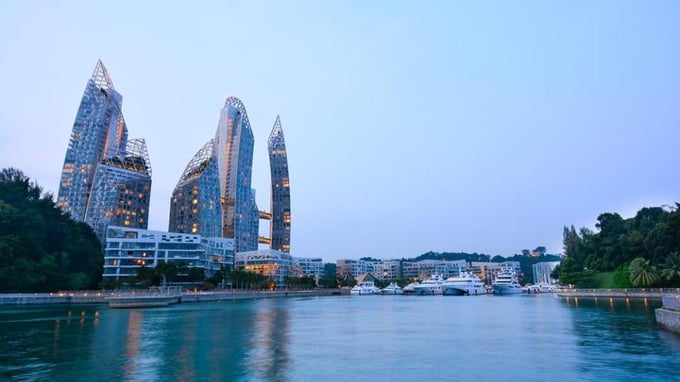 The upcoming BTO launch at Greater Southern Waterfront (GWS) located at the Keppel Club site is expected to cost upward of S$700,000 for a four-room unit and is due to launch within the next three years. Here’s what we know.

When the Minister for National Development Desmond Lee announced on 12th April 2022 plans to redevelop the 48-hectare Keppel Club golf site after its lease expires on 31 March 2023, waves of excitement ensued among potential homeowners.

Adding to the buzz were the eye watering costs analysts have projected to own a unit from this highly coveted development.

Though BTO flats are generally subsidised housing for Singaporeans, analysts claim that the 4-room prices of this launch may cost more than S$700,000, if it is sold as a regular BTO project. For astute buyers who are thinking long term, the high costs of buying a Prime Location Public Housing (PLH) unit are unlikely to be a deterrent.

Read on to find out the hype surrounding the particular development and judge for yourself if it’s worth the exorbitant price tag.

The Keppel Club site will be transformed into the Greater Southern Waterfront (GSW) BTO project - the first to be launched in the area.

This followed the announcement by Mr Lee in November 2020 that a range of housing types including two-room flats and rental housing will be constructed in prime locations like the GSW.

With the recent slew of off city centre PLH home launches such as King George’s Heights, there was earlier speculation that more BTO projects may be launched in locations where resale flats have transacted for more than $1 million. Mr Lee Sze Teck, senior director of research at Huttons Asia noted that as PLH flats can only be sold to buyers with an income ceiling of $14,000 per month currently, this may serve to cap the increase in resale prices.

Are you looking for a home? Compare the best rates for home loans in Singapore so you’ll know what to expect.

How much will it cost?

In an earlier interview, Ms Christine Sun, senior vice president of research and analytics at Orange Tee and Tie, reportedly estimates three-room units to cost between S$400,000 and S$520,000, four-room units priced between S$600,000 to S$720,000, while five-room units are unlikely to be offered as the price would be too expensive.

Do note that these figures are purely estimates based on Ms Sun. Other property analysts have their own differing views on the expected price points too.

Why does it cost so much?

For starters, the development oversees an idyllic backdrop surrounded by nature with waterfront views. Nature-lovers will be thrilled to know that the development will be in close proximity to numerous nature parks like Labrador Nature Reserve, Southern Ridges and Berlayer Creek. The site also encompasses a 30km coastline from Gardens by the Bay to Pasir Panjang.

On top of that, an additional 10 hectares of land will also be set aside for future developments including parks and open land, to allow for more recreational space for the residents.

In terms of connectivity, this BTO development is also extremely appealing as it will be situated near two MRT stations on the Circle Line — Labrador Park and Telok Blangah stations. If you want to take the North-East Line, Harbourfront MRT station is just one stop away, while the East-West Line at Buona Vista is just a mere five stops. It’s also a short 10-minute drive to the CBD area.

Located near Harbourfront MRT, residents will also be able to access VivoCity mall. As one of the largest malls in Singapore, dining and retail options are aplenty. It will also be near offices in Mapletree Business City and One-North, making it an attractive development for office-goers.

Buying a house soon? Check out the competitive prices for home insurance.

What do I need to know about the PLH model?

The PLH model is for HDB flats that fall in prime areas and central locations. HDB flats under this model will be subjected to a longer Minimum Occupancy Period (MOP) of 10 years instead of five years, to ensure that homebuyers do not exploit these government-subsidised flats by selling and profiting once they reach their MOP.

On top of that, homeowners will also be entitled to subsidy clawbacks when they choose to sell their units in the future. Since such flats located in prime areas will “naturally command higher market values”, the units will have additional subsidies on top of the subsidies for regular BTO flats.

Some of the BTO projects that were part of this model were the River Peaks I and II located in Rochor, and King’s George Heights located in Kallang/Whampoa launched in February 2022.

The quota for priority allocation under the Married Child Priority Scheme will be reduced.

Currently, 30% of BTO units are allocated for individuals who want to live with or near their parents or children in the area. However, the quotas will be adjusted depending on their location. Other eligibility criteria remain the same.

What available grants do I have?

The grants available for BTO units under the PLH model will be the same as regular BTO units:

How do other BTO flats compare?

If you compare this BTO development to other launches under the PLH model, this development might be on the steeper end because of its unobstructed waterfront views.

In the recent February 2022 BTO launch, there were two BTO projects that fall under the PLH model as well — River Peaks I and II located in Rochor, and King George’s Heights located in Kallang/Whampoa.

Is it worth applying?

Despite its close proximity to two MRT stations, its relatively central location and appealing waterfront views, prices are still considered to be quite steep. Though you might be able to sell for higher once the MOP is up, there are other considerations if you’re purchasing it for long-term residence.

If it happens to fall under the PLH model, prices might be more affordable, but you’ll have to wait out the 10-year MOP before you choose to rent it out for rental yield or sell it. Ultimately, it depends on your financial situation and your priorities when it comes to house-hunting.

Regardless of your choice, this particular BTO project is definitely going to be extremely popular, so you can expect fierce competition. Mr Lee Sze Teck added that "this is definitely a prime location and the BTO flats are expected to be heavily over-subscribed. We expect the subscription rate to be more than 10."

Are you looking for a home? Compare the best rates for home loans in Singapore so you’ll know what to expect.

May 2022 BTO Launches Overview
How Much Do You Need To Buy Your First Home In Singapore?
8 Hacks To Improve Your HDB BTO Ballot Chances
HDB Downpayment Guide 2022 - Resale, BTO, Staggered Downpayment
Where To Stay While You Wait For BTO And How Much It'll Cost