How Buying a Multi-generational Flat Saves You Money 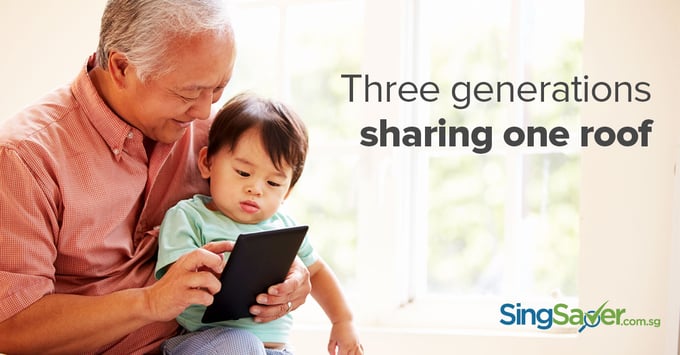 Singaporeans can enjoy several benefits when opting for a 3-gen HDB flat.

The take-up rate for multigenerational flats (or 3-Gen flats) has surprised analysts, hitting 83 per cent. At first, it was assumed that these flats would not be popular, due to certain restrictions. However, Singaporeans seem to have caught on to something: 3-Gen flats are a good way to save money.

What is a Multi-generational Flat?

A multi-generational (or 3-Gen) flat is a type of HDB housing, which was launched in 2013. These flats are open to any married or courting couple, who will also be living with at least one parent. 3-Gen flats are five-room flats; they are 115 square metres (about five square metres larger than most other five-room units), and come with four bedrooms and three bathrooms.

The prices of multi-generational flats differ based on location. The cheapest are in Bukit Panjang (about S$316,000), and the more expensive are around Ang Mo Kio (around S$541,000).

There are two main differences between 3-Gen flats and regular flats, in terms of rules.

First, owners of 3-Gen flats cannot rent out rooms until the end of the Minimum Occupancy Period (MOP), which is five years. For regular three to five-room flats, owners can rent out individual rooms (but not the entire flat) before the MOP is up.

Second, a 3-Gen flat can only be resold to other multi-generational families (one couple and at least one parent).

Despite these limitations, there are many cost savings to be found in these flat types. These include:

It’s not uncommon for Singapore families to be dual income. This usually means there’s a need for childcare services, and some parents are unwilling to engage a domestic helper, or fully entrust their children to a maid.

For young couples whose parents are still able, there is an alternative besides childcare. As at least one parent is residing in the flat with them, the children can be looked after by the grandparents while they work.

Even if this would normally be the arrangement, the couple can save significantly on transport costs, when the grandparents are under the same roof.

This is a key consideration for couples who are expecting their first child, but are also in a financial situation that requires both to keep working.

2. Lower Costs in Looking After Parents

For couples who have elderly parents, there are big cost savings in having them under the same roof. There is no need to constantly travel to their parent’s place to check up, and they are better able to respond to any emergencies (e.g. falls or sickness).

If one of the couple is a home maker, this mitigates the need for a domestic helper or a care nurse; they will be able to look after the aging parents on their own. Over a period of 10 or 20 years, this runs up a significant cost savings.

There is, of course, also the emotional factor of being close to parents; most Singaporeans do not want to put their elderly parents in a nursing home, even if they can afford it.

When multiple people share household utilities, everyone ends up having to spend less.

For example, when everyone shares groceries, the costs tends to go down. When everyone uses the same living room, there is no need for two separate households to buy two separate television sets, and pay separate electricity bills. The same applies to paying for cable channels, or wireless internet access.

These savings can lead to more disposable income for the family, or reduced debt levels.

We Can Expect More 3-Gen Flats in Future

At present, most of the 3-Gen flats are already taken up (651 of 786 available units are taken). However, the government has planned to calibrate the number of 3-Gen flats to meet the demand. The high uptake means we’ll probably see more of these in future.

However, 3-Gen flats will still appeal mainly to home buyers, who intend to live in the flat for a long time (possibly all their lives). These flats will remain unattractive to Singaporeans who see their flat as an investment, to be sold at profit for retirement, or to be used as a stepping stone toward private property.

How Do HDB Home Loans Work?