How Supermarkets Trick You Into Spending More 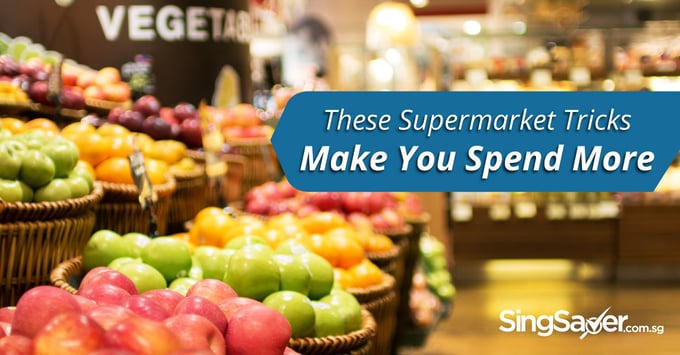 Watch out for these 7 supermarket tricks that make you unwittingly spend more money.

Have you ever noticed that, when you walk into a supermarket, you always seem to spend more than you intended?

Part of the reason is decades of research: over the years, retailers have learned many small psychological tricks, in positioning and pricing so you’re more likely to buy them.

Here’s how supermarkets do it:

They Use A Loss Leader Pricing Strategy

A loss leader pricing strategy refers to deliberately selling some things at a loss, but earning from a markup on subsequent purchases. For example, printer companies often sell printers at a break-even price, but they mark up the price of toner cartridges. Supermarkets use this trick too.

Most customers only remember the “correct” price for between four to seven items. The four most commonly known prices are for rice, bread, milk, and eggs; a handful of other customers may also remember the prices of common fruits (like bananas), or packet goods like instant noodles.

But beyond these, most customers are unable to identify markups. Few people can tell you the median price of 200 grams of black olives, or a 250 gram bottle of chopped thyme. This allows supermarkets to get away with steep premiums on these items.

As such, many supermarkets use “loss leader pricing”, in which common items (rice, bread, milk, and eggs) are sold especially cheap. In some cases they are even sold at a loss. This is to lure you into the supermarket, where you are likely to buy other goods at a markup.

You may also notice a variation on this theme employed by dollar-goods stores such as Daiso. You're lured by a small number of items sold at a bargain, but you're likely to also get some other items while at the store.

Daiso is betting that your shopping basket will be filled with several high-margin items, some of which you can buy for much cheaper elsewhere.

They Keep Essentials At The Back

Most of the essential items you go to a supermarket for, such as milk, eggs and rice, are kept far away from the front of the store. This would seem to make no sense, as it’s less convenient for customers.

However, by keeping these items at the back of the store (or other obscure corners), the supermarket can force you to walk past other items. This increases the likelihood of impulse buys.

When you’re next in the cereal aisle, pick up a box of children’s cereal and look at the mascot’s eyes. Whether it’s a cartoon parrot, tiger, leprechauns, etc., you will notice that the eyes almost always look downward.

This is because children tend to look up at the boxes, and the pictures give them the impression that the mascot is looking straight at them. Retailers have learned from psychological studies, which show that children respond better to a brand when the mascot catches their gaze.

Now you know why your children keep pestering you to buy certain types of cereal, even if they’ve never tried them before.

They Keep Cheaper Or Budget Brands On The Lower Shelves

We’ll let you in on a secret: supermarkets don’t buy most of the items they stock. Instead, the manufacturer / distributor pays the supermarket to put their items on the shelves.

That’s right; the restocking of the items is actually based on the manufacturer/distributor’s decision; not the supermarket itself (that’s why complaining when your favourite brand is gone never seems to do much).

Most budget brands, which operate on lower margins, tend to buy bottom shelf space. So if you want to save money, a good trick may be to direct your eyes lower. Bottom shelf items can cost as much as 15 to 30 per cent less than their mid-shelf counterparts.

They Mix Kilograms And Grams

The answer is actually S$9.72 per kilogram (S$2.96 per 250 grams comes to S$11.84 per kilogram). Now you would think supermarkets should just price everything by the kilo, or per 100 grams; that would certainly make more sense when it comes to comparison.

However, most supermarkets don’t; it’s easy to trick you into buying something more expensive, by mixing up the weights.

In this example many shoppers - who are in a rush and not eager to do the maths - would instinctively grab the more expensive meat, as S$2.96 seems cheaper.

Another way that supermarkets profit is by charging higher for smaller portions. Again, using this same example, you're paying more for that minced meat on a per-gram basis if you buy in multiples of 250gm. Hence, if you notice a large price difference, it might be worth buying more and stocking up the remainder.

They Sell Flowers and Fresh Food By The Entrance

The reason is that supermarkets don’t really expect big profits from these. The margins are low, and they are sold at close to cost price. However, you are more likely to gaze at the other cut meats on sale, when you walk to the deli; and because your mind is on food, you’re more likely to buy a fillet or two.

Flowers are used to make the supermarket look vibrant. Without the florist and deli, supermarkets are dull looking places, with just freezers and shelves.

In fact, if you take away the flowers and deli, a supermarket looks very much like a convenience store or neighbourhood minimart (this is why those smaller businesses tend to come off looking more “low grade”, even if they actually sell the same products for less).

They Litter The Cashier Area With Impulse Buys

Most of the time, you don’t plan to buy a candy bar, or tic-tacs, or M&Ms. We daresay 99 per cent of our readers right now don’t put these on their grocery list.

This is the reason these items are placed at the cashier’s area, where (1) you are certain to see them and be reminded they exist, and (2) are likely to add them to your cart, because it’s almost your turn in the queue, and your brain mistakes this as some sort of “last chance” to buy.

If you’re on a diet, you may want to avert your eyes as you stand in line.

Being Speedy Is Key To Saving Money

Avoid temptation by going in and out of the supermarket as fast as you can. The longer you linger, the more likely your willpower is to give out. Alternatively, you can make a habit of ordering groceries online, where you are less exposed to these tricks.

Use A Cashback Credit Card To Save More

Whether you prefer to shop groceries in-store, or order them online, using the right credit card can help you save.

Try the OCBC 365 Credit Card, which gives you 3% cashback at all supermarkets island-wide, in-store or online. This card also gives you savings on dining (up to 6%), recurring telco bills (3%) and petrol (up to 23.8%). 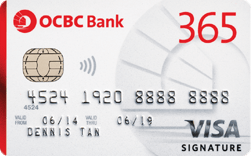 Don't have this card? Apply now and get S$100 Chope vouchers if your application is successful - but only if you sign up through SingSaver.com.sg!

Don’t Waste Your Money On These 4 Scam Grocery Items