Through the ebb and flow of credit, banks and financial institutions create money.

Throughout our lives, we will probably experience economic booms and busts. But have you ever wondered, during the good times, where all that money came from? Or when things go bad, where all the money went? The truth is, a lot of the money we use doesn’t actually exist. Banks and financial institutions play a big role in creating it.

The Supply Of Money

It’s important to grasp the basic concept of money supply, if you’re going to understand how banks create money. Here’s a simple analogy:

How much money is now in your little economy?

Like magic, your initial S$10 has expanded to more than 300 per cent its original amount!

Rather Than A Solid Object, Money Is A Measurement Of Trust

In financial terms, the initial S$10 is what economists might call “broad-based money”, or M1. The subsequent “level” of money might include bank deposits (the money created when you lend to Peggy, James, and Mike), making S$34 the equivalent of M2. There can also be M3, and M4 and so on, with each “layer” involving different kinds of assets (many of which are based on credit, or trust; the sarcastic might call it imaginary money).

Each country calculates M1, M2, and so forth differently. In Singapore, for example, the notes in circulation, plus private sector sight deposits*, make up M1.

If you’re getting a headache at this point, don’t worry about it - the only concept you need to grasp is that money isn’t really a solid object. Rather, money is really a measurement of trust.

Most Of Our Money Doesn't Exist

What the above means is that, when you make a deposit or take a loan, you are helping to create money out of thin air.

Banks use a method called fractional reserve banking, in which only a portion of the money you deposit is kept. The rest of it is actually loaned out to gain interest.

This means that, when you deposit S$1,000 in the bank, there isn’t actually S$1,000 in cash being kept for you. Rather, the bank will hold on to a portion of your deposit (the amount depends on the legally set “reserve level”), and almost immediately loan out the rest to businesses, people buying houses, people buying cars, etc.

That means the money in your bank account is more or less imaginary; after all, you just trust that the bank can produce it on demand. You are, in effect, giving the bank credit; just as the bank gives you credit when you take a loan.

This means that the back and forth issuing of credit “creates” money.

For example, when a company wants to expand, it often takes a loan from the bank. That loan consists of credit, or imaginary money - it doesn’t exist, the bank just trusts that the company will pay it back.

That may sound risky, and it often is. But if this system didn’t exist, companies can’t easily expand; that makes it harder for you to find a job, or get a raise.

Likewise, almost none of us could afford to pay for our houses if not for this “imaginary money”. Bank loans finance 80 per cent of a property price in Singapore; it’s rare to find people who actually have S$600,000 in their pockets to buy a resale flat.

The Heart Of The Banking System

Ultimately, this “creation” of money - as illusory as it may seem, is the heart of the banking system. It’s part of something called capital allocation - and without it most of the country would grind to a halt.

Almost no one has the money to buy actual cargo ships or commercial planes (the cost runs into hundreds of millions of dollars), so if payment for these vehicles had to be made in cash, essential transport services would ground to a halt.

Even among big companies, few can accord to buy a skyscraper in the CBD with pure cash, or to buy a S$300 million production plant at one go (the money is borrowed first, and then gradually repaid as the manufactured goods are sold).

Almost all the conveniences and amenities in your life are, in some way, made possible by this “imaginary money”; and efficient allocation of capital (or the lack of it) is what fuels economic booms and busts.

This is also why it’s important to repay your loans. Defaults destroy trust and reduce credit, and large numbers of defaulters could crash an economy. This was what happened during the 2008/9 Global Financial Crisis, and it’s the reason why bodies like the Monetary Authority of Singapore (MAS) is careful to control how much the banks lend out.

Column: The Consequences of Going Cashless 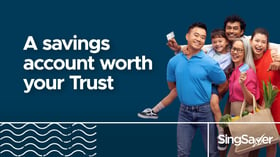 Best Savings Accounts in Singapore to Park Your Money (September 2022)