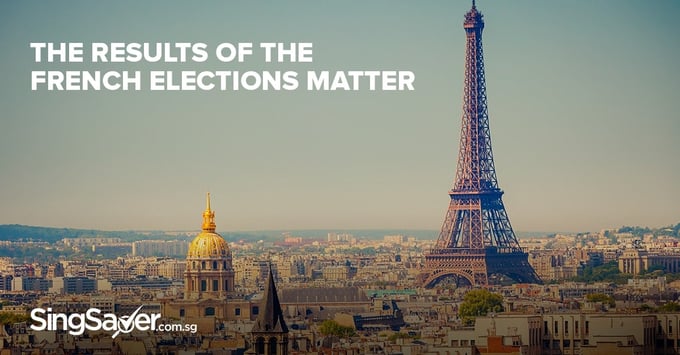 If Marine Le Pen wins the French elections, it could mean fewer opportunities for Singapore businesses.

Most of the time, the only French thing Singaporeans worry about are their seating reservations at Poulet. These past few months, however, you may have noticed financial and business experts sounding a bit nervous about French Presidential candidate Marine Le Pen. Things heated up further when she and fellow Presidential candidate Emmanuel Macron became the leaders.

Here’s why the results of the French elections will matter to Singapore.

A Showdown Between Populism and Globalism

French Presidential candidates Marine Le Pen and Emmanuel Macron are now the front runners and will face off against each other in the final round on 7th May. This is a significant event for two reasons.

First, neither of France’s two main political parties, the left-wing Socialists and the right-wing Republicans, managed to lead. Both Le Pen and Macron are “outsiders”.

Le Pen has put together “144 commitments”, but chief among them are a promise to renegotiate France’s position in the European Union (EU). This could lead to a Frexit referendum, which sees France pulling out of the EU just as the UK did.

On the other hand, Macron has denounced both Brexit and US President Donald Trump (also a populist). Macron is a globalist, and his party is a staunch supporter of free trade.

Macron is currently expected to win (he is expected to capture 68 per cent of the vote, whereas Le Pen is estimated to capture 38 per cent), but remember predictions of Hillary Clinton’s win were wrong in the US Presidential elections.

What Do the Results of the French Elections Mean for Singapore?

As an anti-globalist, Le Pen believes in countries closing off free trade. That is, that countries should protect their domestic companies and workers, by restricting the flow of foreign workers and goods. This would make it more difficult for foreign companies to operate in France.

Now, this alone is not a huge worry for Singapore. However, Le Pen’s impact on the EU is bound to cause more anxiety. With the UK soon to be out of the picture, France’s departure could spell the end of the EU.

Now at present, Singapore is the EU’s biggest trading partner in ASEAN, with over 10,000(!) EU businesses established locally. Around one-third of all trade (goods and services) between the EU and the ASEAN region is from Singapore.

While the EU is not as big a trading partner as, say, China, it’s fair to say we would experience lost opportunities and revenue if the EU were not around. It would certainly make it more difficult for our businesses to operate in Europe, if each state had its own tariffs and regulations (at present, the EU combines them all into a single market).

In an ideological sense, Le Pen – along with Trump – also embody certain ideas that are opposed to the traditional Singaporean ethos. These leaders come off as anti-immigration, opposed to further integration with Muslim communities, and as opponents of multi-culturalism. There may be some discomfort among Singaporeans, at seeing growing support for ideals that run so contrary to ours.

As a financial hub and a port city, Singapore is reliant on a world open to trade. The more countries trade with each other, the more they need shipyards and airports. Being located along the main trade routes is a big source of revenue for many Singaporean companies.

The significance of the Le Pen and Macron showdown is that it reflects the changing state of the world. If Le Pen wins, along with the recent events of Brexit and the Trump presidency, it will suggest the world is turning against free trade. An isolationist world means fewer opportunities for Singaporean businesses and losing trade and investment that’s vital to our country.

Clearing the Confusion Among New Property Measures in Singapore