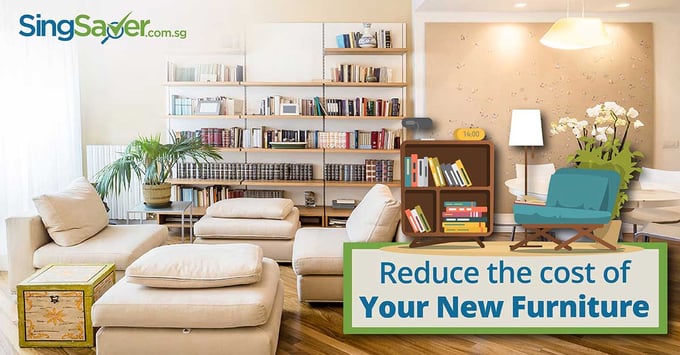 Busting your budget on new furniture is hardly an ideal way to start enjoying your new home. Here's how you can furnish your abode for less.

Once renovations are done, you have to contend with the difficulties of furnishing. You’ve already spent a bomb, so how can you minimise the damage?

Never fear - this season, we've rounded up some of the most budget-friendly ways to get a well-furnished home, without spending a fortune.

1. What You See in a Magazine, Your Contractor Can Probably Make

See that gorgeous S$25,000 dining room table in the magazine? What if we told you there’s a way to get it for half the cost, maybe even less?

A lot of Singaporeans don’t realise that contractors don’t just drill holes and lay flooring. Many of them also have their own manufacturing capability. Every home is unique, and interior designers may call on them to custom build items.

Those same workshops, however, can be turned to furniture. If you show something in a magazine to the contractor, they may be able to produce something similar.

It won’t be exactly the same, but it’ll be a lot cheaper and can look just as good. Remember, if you buy the genuine article from a store, a lot of your money is just going into branding and marketing costs.

The cheapest source of second-hand furniture in Singapore, hands-down, are expatriates who are moving out. Some of them rent their apartments or houses unfurnished (families in particular like to do this), and most of the stuff in the property is their own.

Their landlord will be chasing them to clear it out, to make way for the next tenant. And due to the high cost of shipping, they seldom want to bring all the furniture home. This is your cue to swoop in, and buy everything at bargain prices.

Ask expatriates in your office, or go on expatriate forums and ask around. Odds are, someone is selling furniture on the cheap.

3. If You Must Borrow to Buy, Use the Bank or Interest-free Credit Card Clans

Many home furnishings stores (we won’t point fingers) have in-store credit deals. These are financing deals that the store came up with, and they’re often convenient. You may not even need proof of income, and approval can happen on the spot.

But stores aren’t stupid! While you have the furniture, they don’t have the money; and there’s no guarantee you’ll pay them back. As such, what they often do is ramp up the interest rate, to the point where the item is already paid off in the first few months (despite it being a one year loan).

This could mean paying interest rates as high as 36 per cent per annum, and the store often retains the right to repossess the furniture if you don’t pay on time.

In contrast, a personal loan from the bank has an interest rate of between six and nine per cent per annum. Search around, and you sometimes find deals as low as 4.27 per cent.

Credit cards have a higher interest rate, usually around 26 per cent per annum. However, some credit cards let you make interest free repayments for the furniture, over periods of up to 3 years.

In almost every situation, these are better options than using in-store credit.

4. Optimise Your Credit Cards When Buying

Buy the furniture through your credit cards, and then repay the credit cards immediately afterward (this way, there’s no interest rate). That's a oft-repeated mantra of responsible card users. However, fewer cardholders know to maximise their savings by picking the right card.

For example, say you have a card with six per cent cashback, that’s capped at S$90. This would mean that, after charging S$1,500 to the card, there’s no longer any cashback benefit to using it. You might want to charge S$1,500 to this card to get the maximum cashback, and then switch to another card for further benefits.

Also, check which stores have deals or promotions relevant to your credit card. There’s no point using a petrol credit card to buy furniture, when your shopping card would give you twice the reward points, as well as possible discounts.

5. Buy Everything as a Bundle

Stores sometimes have bundle deals, where you can buy whole sets of furniture to complete certain rooms.

Some furniture stores bundle this part of a furnishings package - for example, a store might have a deal to fully furnish your study for you, and all the items in it will come with a bulk discount.

(Incidentally, if you have a library, stores like Kinokuniya can fully stock the shelves, and you’ll also get a bulk discount).

This typically shaves 10 to 15 per cent of the cost of buying items individually. The downside is that it’s a little less customisable, as you’re getting a fixed bundle (there may be the occasional chair you think looks hideous, but is part of the deal).

This sort of deal is good for landlords who want to rent out the property, as it also saves on time, and having to engage an interior designer.

What to do if You Run Out of Money During Renovations