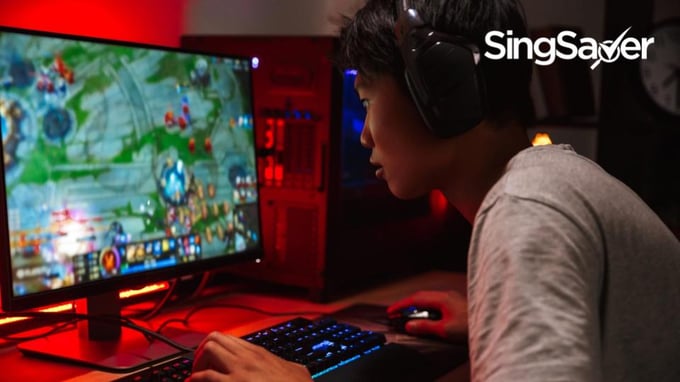 Why choose a gaming desktop? One word: Performance.

Despite their decidedly frivolous moniker, gaming desktops are powerful computers that are built to take on some of the most intense and demanding computing tasks. Most of these take place during gaming, with today’s AAA games requiring top-end processing speed and power to bring to life gorgeous and immersive fantasy worlds.

Gaming desktops are configured with higher-spec components that allow them to outperform normal desktops. Since they are designed to withstand prolonged periods of rigorous use (gamers have been known to play throughout the night, even the weekend!), they are arguably longer-lasting than computers made for office or general use.

As such, gaming desktops can last longer and offer more stable and reliable performance, which makes them an excellent alternative to normal desktops.

But aren't they terribly expensive, you ask? Well, yes, computers built for gaming used to be crazy expensive costing up to an entire paycheck and a half. But thanks to market competition and technological advances, the prices of the sophisticated components needed to create a high-performance gaming machine have dropped considerably, enabling even consumers with small budgets to purchase gaming desktops.

Here are 7 of the best gaming desktops you can buy for under $3,000 (display monitor and other peripherals not included!).

Recommended for: Those seeking a budget desktop with true gaming performance.

Built for 1080p gaming performance at bargain bin prices, the Level 0 is for anyone seeking to switch to a gaming desktop without burning a hole in their bank accounts.

The PC manages this thanks to shrewd use of the AMD Ryzen 5 3500X processor, paired with an overclocked GTX 1650 4GB graphics card for stable and solid gaming for most popular e-sports titles.

A 650W power supply unit takes care of power flow, while heat management gets a boost from 4 built-in case fans that are also programmable with multi-changing RGB lights.

While it isn’t configured for top-notch 4K performance, the Level 0 will provide crisp visuals and dynamic performance for classic titles running in 1080p.

Recommended for: Those seeking an entry-level gaming desktop with generous storage.

The choice to furnish the Lenovo IdeaCentre Gaming i5 desktop with the mid-range Intel Core i5-10400 processor and the Nvidia GTX 1650 Super marks this machine as one for users who enjoy cranked up graphics during weekend gaming binges while delivering reliable performance during weekday work tasks.

Another plus point is the generous storage space that comes bundled - you’ll get a 512GB solid state drive (recommended for the operating system, on account of its faster speed) as well as a 1TB harddrive for general media and file storage purposes.

At just under $1,400, the IdeaCentre Gaming i5 is a good pick for avid gamers and those who dabble in video and photo editing alike.

Recommended for: Those who want a mid-performance gaming desktop at wallet-friendly prices.

The Dell G5 series of gaming desktops is noted for being solid mid-range machines that are comfortably priced, offering a good balance between performance and value.

At its most basic, the G5 features the newest 10th-gen Intel i5 CPU for speedy performance in most everyday tasks. As for the graphics card, Dell has chosen to go with Nvidia’s GTX 1650 Super (a tuned-up version of the regular GTX 1650), for some extra oomph during gaming and other graphics-intensive uses.

The G5 comes with a 256GB solid state drive plus a secondary 1TB harddrive, which should provide plenty of storage space for the average streaming-focused user.

In true Dell fashion, you can choose higher-spec components for your G5 if you have the budget to spare. We recommend upgrading to a GTX 3060 Ti to unlock a higher level of gaming performance.

Perhaps the best value-for-money desktop in the sub-$2,000 category is the Aftershock AMD Premium Combo 1, which offers premium gaming and graphical performance without the high price point.

At its heart is the AMD Ryzen 5 3600 CPU, a chip popular for its outstanding performance and small form factor. Taking up the graphical load is the powerful AMD Radeon 6700XT graphics card, its 12GB configuration easily capable of handling even the most demanding games out there.

The result is smooth, seamless 1440p performance while playing your favourite games or streaming the latest blockbusters on the living room TV.

Recommended for: Those seeking a little extra computing power while staying within $2,000.

What do you get when you combine one of AMD’s top CPUs with one of Nvidia’s best graphics cards of all time? A gaming desktop with power to spare but is easy on the wallet.

Such is the case with the Asus ROG Strix, which combines the AMD Ryzen 7 3700X with the Nvidia GeForce GTX 1660Ti for top-notch performance that will belie its $2,000 price tag.

Yes, both of these are older-gen cards, and have had their day in the sun, but there’s no denying that they are still perfectly capable of handling the demands of today’s average user, including full 1080p gaming.

Recommended for: Those seeking a mid-range machine for both high-definition gaming and intensive work tasks.

The Acer Nitro 50 range of gaming desktops comes in many configurations, but it’s the highest-end one that will give you the most bang for your buck.

For just under $2,400, you can get a 10th-gen Intel i7 processor with plenty of muscle to power through most tasks, along with a souped-up GeForce RTX 2060 Super to handle high-performance graphics and high-definition gaming at a crystal-sharp 1440p.

Recommended for: Those willing to shell out for true 4K HD gaming and graphical performance.

Those who seek true 4K HD performance for gaming and streaming or a setup powerful enough for smooth graphics rendering and video editing will be delighted that such capabilities are now available for under $3,000.

Aftershock’s AMD Extreme Combo 2 pulls off this feat by combining the Ryzen 5 5600X CPU (widely regarded as the best processor for pure gaming PCs in 2020) with the considerable power of the Radeon 6800XT OC GPU, whose 16GB build ensures impressively smooth performance even during the most demanding tasks.

Get this gaming desktop if you’ve been itching to see how your favourite AAA games or blockbuster movies look in true 4K HD glory. Just know that you may never be able to go back after.