Can You Afford to Throw a Punch in Singapore? 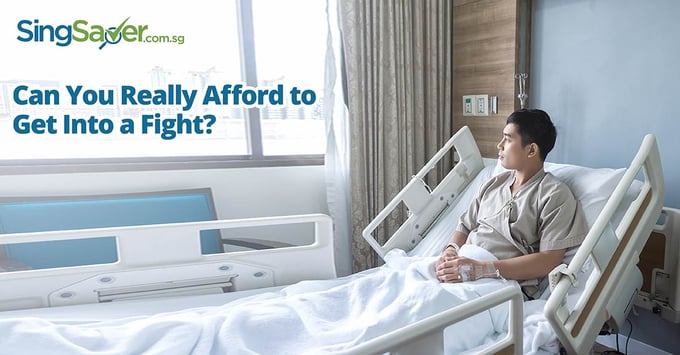 Thanks to heavy penalties and stiff hospital charges, getting into a fight can have long-lasting consequences that could cost you much more than you think.

By now, you’ve probably heard of the fight in Golden Mile, in which a 22-year old man has been charged of voluntarily causing hurt. This was due to - of all the stupid reasons to fight - a staring incident.

But it also provides an interesting look at the costs behind getting into a brawl. No matter how angry you are, think before throwing that punch.

The Legal Costs of Getting Into a Fight

Unless you can prove you were acting in self-defence (this is up to your lawyer), you can be charged for voluntarily causing hurt. There are actually two categories of this in Singapore.

Voluntarily causing hurt is defined in Section 319 of the Penal Code as:

“319.  Whoever causes bodily pain, disease or infirmity to any person is said to cause hurt.

Explanation—A person is said to cause hurt if he causes another person to be unconscious.”

If there are extenuating circumstances however (e.g. you were provoked into starting the fight, such as if someone slaps you), the penalty decreases to a maximum of three months in jail, plus a penalty of up to S$2,500. No matter how angry someone makes you, keep that in mind.

If you inflict worse injuries, you’ll be charged with voluntarily causing grievous hurt. Under Section 320 of the Penal Code, this involves injuries such as:

In addition to the above injuries, the person causing the hurt must intend to cause such hurt, or know he’s likely to cause it (e.g. if you don’t intend to blind someone but do it accidentally, it may not count as voluntarily causing grievous hurt. But you’ll have to get legal advice on that).

Under these circumstances, the penalties can be extended to 10 years imprisonment, and you could also be caned and fined.

If you use a weapon (e.g. a parang or acid) in either case, the penalties can extend up to life imprisonment, along with fines and caning.

Let’s assume you start a fight because someone stared at you wrong. Assuming you’re charged with voluntarily causing hurt, and get a jail sentence of one year, consider the lost income:

The median wage in Singapore is around S$4,000 per month. Your time in jail would translate to a loss of S$48,000, excluding any bonuses. But it doesn’t end there.

It’s much harder to find a job after you have jail time on your record. While prospects for ex-convicts are improving, there’s a good chance you won’t be earning your former income, when you first come out jail.

We’ll assume that, due to rehabilitation programmes, you’re able to secure a job almost as soon as you’re released (if not, you will end up losing even more income, and struggle to keep yourself fed while unemployed).

Say your new job pays about S$2,500 per month, or about S$1,500 less than your old job. You take about seven years to work your way back up, or move back into your previous career. That’s a further loss of S$126,000 (and you’re lucky it’s not a lifetime loss of income; some ex-convicts never get back to their previous income level).

The Medical Costs of Getting Into a Fight

These aren’t restricted to your own medical costs - remember that, in the aftermath of a legal battle, you may be obliged to pay for the other parties’ medical costs as well.

Some costs you’ll probably face are:

(The following are based on average costs, derived from Ministry of Health guidelines. We are also assuming that hurt, rather than grievous hurt, was caused. These cost can vary significantly based on the nature of injuries).

We’ll assume you pay this two times over, including injuries to the person you attacked (you probably won’t get away without injuries of your own).

On top of this, note that your insurer will investigate, to gauge your liability. If it turns you were the one responsible (or mostly responsible), they may refuse to pay out (otherwise, every thug on the street will just get insured, before they go out and join a gang fight).

What A Fight Really Costs You

Assume you are jailed for one year, with a fine of S$3,000 for voluntarily causing hurt. After a year in jail, plus seven years to work your way back up to your previous income (see above), the cost comes to about S$177,000.

The total medical costs, for you plus the person you’ve hurt, comes to about S$5,784.

The final bill for your scuffle? A hefty S$128,784; and that’s a generous estimate (i.e. not the full penalties, assuming quick re-employment and eventual career recovery, assuming none-too-serious injuries, etc.)

Throwing a punch in Singapore can cost you upwards of S$100,000. Far cheaper and healthier to take up Zen meditation!

5 Hidden Costs of Waking Up Late Why Critical Illness Insurance Is Crucial To Your Financial Planning 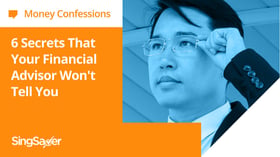