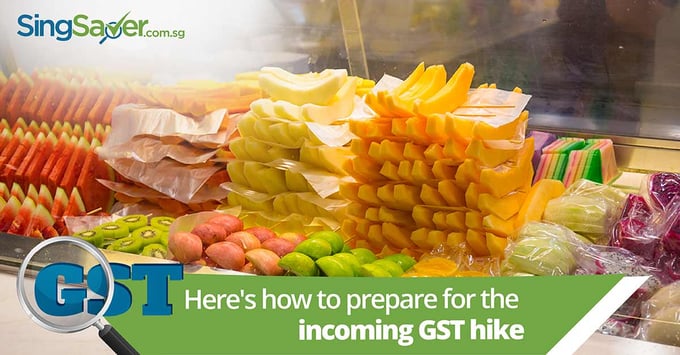 Judging by recent chatter, a GST hike is on the cards. Consider making these 5 changes to soften the blow when the increase lands.

While the date isn’t fixed yet, it looks like Singapore is in for a Goods and Services Tax (GST) increase. Whatever your views are on this, one thing’s for sure: the cost of living is about to go up again, and it’s time to prepare for the inevitable.

Get started today with a few simple steps.

We don’t know what the actual GST rate will be, but we can make a good guess.

At present, Singapore’s GST rate is seven per cent. The GST rate was three per cent when it first started in 1994, and was raised to its current level in 2006. That’s a raise of four per cent in just over a decade.

At the same time, we can see that GST in regional counties, such as Vietnam and Australia, is around 10 per cent.

As such, it’s probably safe to plan for a GST rate of about 10 per cent, in your budget. While the GST hike probably won’t happen soon (it could be several years in the future), you might want to try to acting as if it’s already here - that will help you to prepare for it. Treat everything as if it’s 10 per cent GST in your budget, and set aside the monies you save this way.

Note that the government is also considering applying the GST to online purchases (currently it only applies to purchases with a value of S$400 or more). Don’t count on e-commerce to help you bypass the tax for much longer.

2. Get Big Ticket Items Before the GST Hike Kicks In

If you’re planning for any major purchases that could incur GST, such as a new refrigerator or air-conditioning system, you may want to speed up the buying decision.

You’ll want to get these items before the GST kicks in, as the savings will be substantial. An added three per cent GST on a S$5,000 air-conditioning system, for example, would be S$150.

Again, you probably have a few years before the GST hikes comes, so there’s no need to rush out and do it tomorrow. But you may want to ramp up your savings, in case you need to hurry and buy it when the GST hike finally lands.

The GST hike will cause a general rise in cost of living.

Remember it’s not just your personal expenses that will be impacted - businesses have to pay GST as well, and some of them could pay more for costs like supplies and delivery. These are costs that they might pass down to you.

You should revise your desired income after retirement, as well as the amount you need to save for emergencies. Speak to a financial planner for more help on this.

A quick and easy way, however, is to try and nudge up your intended post-retirement income (e.g. instead of aiming at S$2,000 a month after retirement, aim to get at least S$2,200 per month.

You may also want to review any fixed income assets you possess, such as bonds. Remember that the fixed income (such as bond coupons) won’t change, even if the cost of living rises - they may now be worth less in your portfolio, in the face of climbing taxes.

Ensure your financial planner reviews your asset allocation, in light of this.

Businesses only have to be registered for GST once they have an annual revenue of S$1 million. This means that some small businesses, such as corner store eateries, won’t be affected by the hike in GST.

This helps fledgling businesses to grow, and keeps small, family-operated type stores in business. There are many of these small shops in heartland areas, often scattered around HDB estates.

By shopping at a small, family-owned provision store, instead of a chain supermarket, you can save money on GST. At the same time, you’re also helping to keep another Singaporean family afloat.

Look around for these businesses, and try to get into the habit of using them for everyday essentials.

5. Check for Ongoing Costs that may be Affected

Take note of any ongoing costs, which may be affected if there’s a GST hike. For example, if you have a cable subscription and a gym subscription, regular payments may rise in accordance with an increased GST.

Keep track of them, as automated payments are quite easily forgotten about. You may want to review your need for such services in future. If you're really only watching a few programmes, or using the gym once or twice a month, consider cancelling your subscriptions in favour of other activities.

5 All-Natural Replacements For Household Products (That Saves You Money!)