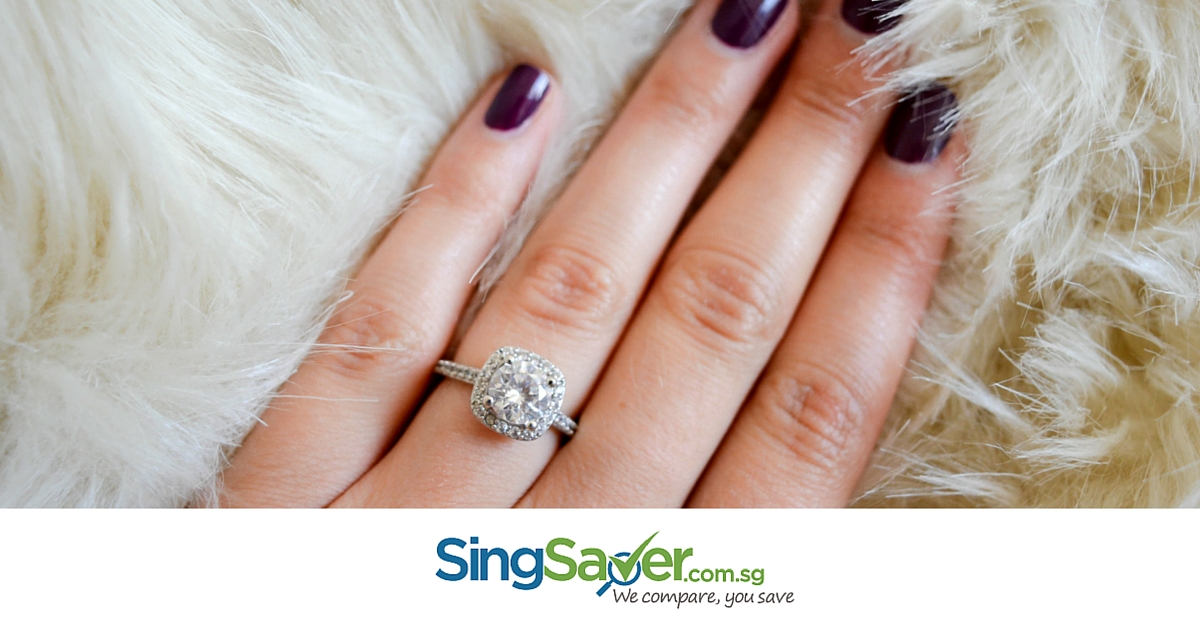 Does the rock on your finger mean true love or flashy gesture? We reveal what the price of your engagement ring really means.

If you say it doesn’t have to be valuable, you’re unromantic and crass. If you say it has to be expensive, you’re materialistic and shallow. It’s like when a woman asks you if she’s fat – there is no correct answer.

So here’s what we’re going to do. We’re going to advance an opinion on what the price of your engagement ring says about your relationship.

The Truth About Engagement Rings

It’s often claimed that a diamond engagement ring is an “ancient tradition”. It isn’t at all.

Over time, a man’s willingness to grossly overspend on a ring was associated with his degree of affection. It is reflective of how rich he is, and how much debt he is willing to put himself in, for the sake of someone who theoretically loves him back (never question the logic of the self-entitled, it’s futile).

Not all Singaporeans think this way, of course. But for those who still believe in such things, we put together a scale indicating what the price of your engagement ring means:

You and me, we’re poor. But we’re in this together and we’ll work our way up. I’m confident enough to give you a cheap ring, because I know you’ll love me anyway.

Assuming meals are S$5 each, this is a sacrifice of at least 2.2 months worth of food. That’s breakfast, lunch, and dinner. Do you know what it’s like to not eat for 2.2 months? If yes, then you’re Kate Moss.

We’re a lovey-dovey couple that conforms to all the social norms. We have nothing to hide from most friends when it comes to the ring. It’s not the best, but face has been saved. We’ll probably struggle to keep up with the Joneses, even if we don’t actually like to.

About one month’s pay for the average Singaporean. Assuming you hit clubs like Attica or 1 Altitude once a month (about S$250 a night), this is one and a half years of clubbing. But hey, you won’t be doing that anyway once you’re hitched.

Or if you’re not into clubbing, S$4,000 can almost buy you a new iPhone, new iPad, and new MacBook. All at once.

We’re that couple that goes out of our way to impress others. We buy expensive things, but not super-expensive because our earning capacity is not quite sufficient.

One of us may not be fully secure, and never got past that phase where we still feel a need to demonstrate high value to the other.

Picture a lavish meal at a sit-down restaurant, for S$150. A mid-range place at Marina Bay Sands perhaps. For this price, you could eat that way every night for more than a month.

Alternatively, enough to pay the mortgage on a three-room flat for almost four months.

We’re both highly paid professionals, and if we’re not, I’m sure we’ll enjoy our time in debt together over the next three years. Remember I haven’t paid for the wedding dinner and photographs yet. We both enjoy noticeable clear romantic gestures, not the little subtle ones.

Enough to cover three to four months of rent. In an apartment in Manhattan in New York. This is potentially enough rent money to fly abroad for a quarter and try to start a new career there (just the rent mind you, not the other details).

We need to impress our friends. More importantly, I needed to impress your mother. This should barely be enough to buy parental approval from your side of the family, and you’re a princess.

Sufficient to pay for every smartphone app you are likely to download for the rest of your life. Most people download and use two to three per month. Around 8,585 apps should thus keep you entertained for about 234 years.

Can buy a high-end DSLR camera, or put a child through two and half years of tuition (one hour a week).

Love will keep us alive is going to be our wedding song. We both take Romantic Comedies seriously, and believe there is an inverse relationship between love and financial sense.

What sacrifice? At this point you’ve lost the ability to feel pain anymore.

S$10,000 is the about the fine that you’ll pay for illegally boarding a plane and telling it not to take off, because one of the passengers is the love of your life.

That’s because it is. It is silly to think the price of the ring has any true bearing on the nature of your relationship. If you decide to spend your life with someone, don’t let it be on the basis of a financial transaction.

It’s hard to sustain a happy relationship when the mortgage is in arrears, you can’t afford to put your child through school, and you’re eating Maggi mee five days out of seven. A rock on your finger is not going to remedy any of that.

So here’s the biggest money saving tip you’ll ever get about getting married:

The appropriate price of the engagement ring is not “one month’s salary”, or “three month’s of her parent’s salary”, or whatever ridiculous nonsense you may have heard.

The appropriate price is the one you can pay, and not be in debt for more than a month. That’s the correct price.

Pro tip: however much the engagement ring costs, use a cashback credit card like the Standard Chartered Unlimited Credit Card, so you can earn rebates and recover some of the costs.