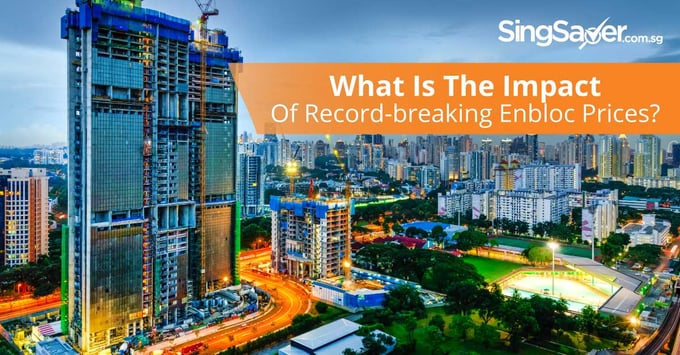 Foreign funds are driving en-bloc sale prices to new heights. How will this impact Singaporeans?

We’ve been seeing crazy prices for en-bloc sales lately. Even as we write this, the Straits Times is reporting the chance of yet another S$1 billion land sale. The previous record was in May this year, when a plot along Stirling Road was purchased for S$1 billion by a China-based developer. What’s going on, and why are en-bloc prices so high right now?

Developers Are Bidding Much Higher For Land

Residential prices are now 29 per cent higher than they were in 2012. The main culprit? Foreign property developers, primarily from China. Property firms from mainland China have caused equally big distortions in Hong Kong and Australia, and Singapore is firmly in their sights.

Here are four reasons why en-bloc prices are likely to rise, as a result.

China-based developers are willing to accept low profit margins - this is a speculative risk, which they can afford due to deeper pockets.

For example, some China-based developers may be willing to risk a bid where the profit margin is close to zero; they then build in the hopes that, by the time the property is ready to launch or complete*, prices would have risen, thus raising their razor-thin margins.

They can do this because they’re better capitalised (read: have much deeper pockets) than smaller local developers, who wouldn’t take such big risks. The end result is their willingness to make massive bids during land sales.

*A foreign developer has seven years to complete and sell a development, to avoid Qualifying Certificate (QC) charges. In addition, all property developers are subject to the Additional Buyers Stamp Duty (ABSD) for developers, which requires properties to be completed and sold off in five years.

China-based Developers Are Pressured To Diversify And Move Abroad

Property developers in China aren’t rosy about their prospects back home. Singapore is just one country caught up in a massive push abroad, as these companies struggle to escape a slowing domestic market.

There’s also a constant worry regarding China’s monetary policy. In 2016, for example, China allowed the yuan to depreciate. China claims they’re allowing the yuan to fall to its real, market-determined value; but there’s a clear incentive for them to weaken the yuan, to keep their exports competitive (if the yuan is too strong, fewer foreign countries will buy from China).

In any case, it provides further impetus for China-based developers to move abroad. They want to make money in other currencies, in case the yuan plummets.

Due to our political stability and well-regulated institutions, Singapore is considered a safe bet. On top of that, foreign developers have noticed how - even during a downturn - property developers here have maintained healthy balance sheets.

This builds a lot of confidence in foreign developers. Most would rather bid high for Singapore land, than bid a smaller amount for equal sized plots elsewhere.

It’s A Branding Exercise For Some China-based Developers

Branding is important for property developers, especially those who want to break into new markets. For some China-based developers, the immediate intention is not high profits - it’s to establish themselves as a presence.

The easiest way to do this is to build in prestigious property markets, such as London, Paris, Singapore, New York, etc. Some developers are willing to tolerate small profits on an initial development, to properly brand themselves.

Government Measures Are Likely On The Horizon

The influx of Chinese money is, of course, a benefit to those living in old estates (and are eager to sell). In the long run, however, we should expect to see some government controls.

When developers bid higher for land, the prices of their properties tend to go up as well. This doesn’t just affect new properties - prices of resale condos often move in tandem, thus driving up private property prices in general.

This could be bad news for Singaporeans who are trying to upgrade, or who want their children to have a shot at private housing.

Given our government’s willingness to intervene however, we’re likely to see some kind of policy measures kick in, before it goes that far.

What to Consider Before Buying an Under-development Property in Singapore