Money Confessions: What having S$1 in my bank account taught me 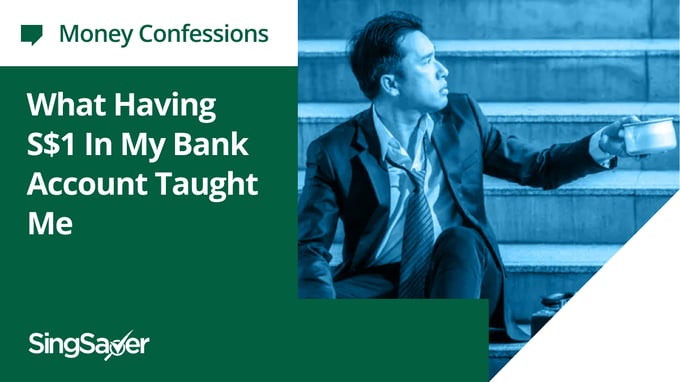 I didn’t always have just S$1 in my bank account. Here’s how I arrived at that state and what I did to pull myself out of it.

Do you remember when you first saw a four-digit number in your bank account? I didn't until I was 19 years old. At a young age, I had never seen a S$50 dollar note, let alone anything with more than one zero. My parents had tried their hardest to instil in me a sense of thriftiness that is inherent in them, by limiting my allowance (which was barely sufficient for a student to begin with). Clearly, they weren’t successful. Ergo, while my friends were comfortably feasting during recess, I was sweet-talking the drinks stall auntie for a discount.

When my first pay allowance of S$1100 came in during my first month as a newly promoted military sergeant, I felt like everything and anything was possible. Things I never thought I wanted were things that I suddenly felt I needed. I recalled walking past a JBL speaker that cost two-thirds of my allowance, and felt a sudden urge to buy it. It wasn’t that I needed a speaker; it was the fact I could get one. I felt like a grown-up after my first big purchase, like it's an affirmation of my maturation. The regret only set in later. This is in retrospect of course, for I wasn’t as clear-minded as I am now.

It became a vicious cycle

This desire grew into an unhealthy obsession with material goods, which just snowballed when pride and greed entered the equation. I wanted to show my friends that I had ‘disposable income’. I did not just stop at individual purchases anymore, for it had developed into this need to pay for others as well. Then, I might have convinced myself that it was a gesture of goodwill, a display of appreciation for my friends. But truly, it was pride. For a while, whatever we ate or drank as a group was paid for by me. Never once had I offered to split the bill or expected anyone to pay me back, for I felt asking was a confirmation of my financial weakness. This carried on even after I had fulfilled my military obligations, whenI became a tutor with a reliable list of clients.

There was a sense of thrill and euphoria whenever I casually handed over my credit card, and it felt better with people looking — until the end of the month rolled by, when my funds started running dry. I started scrambling for reasons not to meet my friends as I began navigating this web of regret and remorse. “I’ll start saving next month,” I promised myself at the end of every cycle. But when the empty jug was once again filled with water, I drank it all in a matter of days.

It got to a point of no return

I could no longer bear the reality check that viewing my bank account balance gave me, so I avoided checking my statement completely, preferring to  revel in ignorance when it came to my financial health.

And then, reality caught up to me a year later. During dinner with a group of friends, the waiter returned to the table, and he whispered in my ear that my card had failed. I was confused, perplexed and embarrassed. My friends looked at me, wondering if something was amiss. I forced myself to look at my bank account balance, hiding the screen away from prying eyes, and there it was: S$1 left in my bank account. Afraid of blowing my cover, I meekly told them that the card was locked due to security reasons, and asked if they could foot the bill this one time. While they were skeptical, they did not pursue the matter further. It was the first week of the month, and I had never felt more vulnerable and compromised that day.

Soon after, bills started flooding my inbox, along with emails that went, “Mr Yee, please update your payment details and clear your outstanding amount by [date].”

I began accumulating late fees and instead of emails, I received phone calls chasing me for payment.

Eating out was a luxury now, and I relied on instant noodles to keep me full. My parents never knew about my situation and I never revealed anything, as I didn’t want to provide them with more fodder for criticism. During gatherings, I would be the only one not ordering any food, fending off relentless questions by mentioning my diet plan. I had my internet cut off for a while, and had to borrow cash from a friend to have it restored.

The tipping point was when my dog became gravely ill, and I could not afford to bring her to the vet. I had to plead with my clients to pay me in advance, just so I could afford the veterinary bills. It did not help that my parents were having financial troubles of their own.

I felt like a failure, a disappointment and a burden. However, it was also an epiphany for me, as I realised that my overly liberal money habits would be detrimental to not just my future goals, but the welfare of my loved ones. I could never have escaped this cycle of debt if I hadn’t made major changes to my lifestyle.

After a year-long ordeal, I have emerged from my financial instability stronger and more informed. I have put aside my vices in favour of financial security. It was extremely excruciating at first to withdraw from the indulgences I had grown accustomed to. But I was tired of the barrage of emails and phone calls, and giving in to temptation was not worth the emotional trouble. Plus, having your internet service cut off is not fun.

I focused on my debts first— I ensured that all outstanding debts were paid off just to get a peace of mind. I’m proud to say that I’m finally debt-free! I have also cultivated a more conservative approach to my finances (albeit gradually), putting aside a strict portion of my income into an untouched account. I started small, slowly eliminating meaningless purchases and replacing expensive vices with cheaper ones, or at least reducing my purchase frequency.

My next step was to begin my foray into investing. Currently, I have invested a substantial portion of my income into bonds and designated funds into experiential mediums such as cryptocurrency. Right now, I’m in the midst of comprehending the nuances of the Supplementary Retirement Scheme (SRS) as well as the other securities available.

Lessons I have learnt

#1 Do not let pride and impulse misguide you

It is easy to forsake practicality for momentary gratification. Learn to distinguish between a need and a want. Impulse purchases are typically wants that disguise themselves as necessities. A general rule of thumb is to remain patient with your purchases, especially if it’s a big one. Taking the time to mull over something you want usually helps you discern better if you’re making an impulse purchase.

#2 Look long-term, not just the present

Focus on your long-term goals and ambitions. Decide what essentials you would like to have in the future. Conventional desires include housing, insurance, and travel. You might also want to look into earning passive income through personal investing.

These desires typically entail huge capital and debt that span for years, and it will be a rude awakening if you do not plan pre-emptively. Write down your plan  — estimate the debt you will incur and compare them with your current assets. Are you on track or far behind your goals?

#3 The small things add up

Ironically, it is the accumulation of small purchases that devastate our bank account. The daily food deliveries, Grab commutes, and other nitty-gritty things can add up rapidly and without you realising it. Daily expense journaling may help, but it can sometimes be an additional chore to do.

An easy way to circumvent the hassle is to pay for your purchases with physical cash. Withdraw a sum of cash at regular intervals to get a clearer understanding of your spending habits.

#4 You do not necessarily have to scrimp

Many assume that in order to save, you will have to overhaul your lifestyle and stash your cash away in a bank. That’s not necessarily true. Many of your day-to-day luxuries can remain a part of your life, just at a more affordable rate. Promotional codes are ubiquitous now, from food deliveries to ostentatious buffets So you can still indulge in the occasional treats to reward yourself for budgeting well.

Nevertheless, it remains imperative that you reduce the frequency of these purchases. But when you do decide to make them, supplement them with discounts and deals that make these purchases worthwhile.

Also, be sure to stay updated on potential deals exclusive to your credit card to reap sweet benefits while you spend.

You will most likely fail when you first kickstart your journey towards financial security. I have repeatedly attempted to handle  my finances better, only to fall back into old and unhealthy habits. It's like a yo-yo diet – I begin the journey with great resolution, but when withdrawal and stress set in, I give in to temptation again.

It's okay to fail. Just keep at it. This is an ongoing process and no worthwhile habit is cultivated within a day. I began my financial wellness journey with just S$1.

It gets easier after.

In hindsight, that realisation that I had just a single dollar left in my bank account was the best thing that happened to me, as it had opened my eyes to the importance of personal financial management. Yet, I do not wish it on anyone.

Financial literacy is crucial when you begin your personal financial journey. Singsaver has a multitude of essential resources to help guide you through the nuances of personal money management. All the best!

Sean loves all things that is food (except bitter gourd — the bane of all cuisines). However, he loves his wallet too. As such, he has set himself on a quest to find deliciously cheap food while exploring opportunities to grow his wallet; just so that he can get more food. A vicious cycle really.