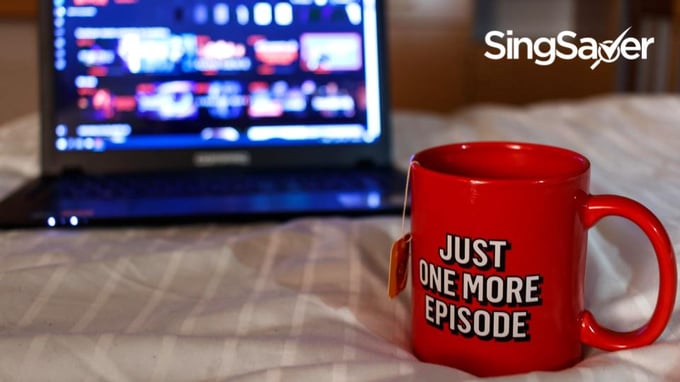 But it wasn't until January 2021 did the streaming platform finally release the seventh season of Brooklyn Nine-Nine, almost a year after its premiere on NBC. It’s a maddening conundrum, considering how reliant I’ve become on Netflix to satisfy my entertainment needs.

Sooner or later, I’ll have to face facts. The video streaming market is rapidly saturating. In the US, American sitcom Friends has been pulled out of Netflix and sent to HBO Max. It’s only a matter of time before a close competitor surpasses our beloved streaming OG, like the recently released Disney+.

Perhaps now is the time to rethink your entertainment choices. This boils down to the type of shows you’re into, and the amount of money you’re willing to shell out on a monthly basis.

If you’re a K-drama fanatic who can’t be bothered about American sitcoms, Viu is the way to go. If you belong to the community of Office, Community and Parks and Rec diehards, you’ll want an Amazon Prime subscription, not a Netflix one.

Here’s a breakdown of every major streaming service in Singapore to help you determine which of these is the best for you in 2021.

Founded in 1997, Netflix has been around for ages, but has only risen to an unprecedented level of influence in recent years. The king of all streaming sites with an Internet slang of its own (‘Netflix and chill’), it not only hosts an enticing variety of movies, TV shows and documentaries, but also produces originals such as Stranger Things and Orange is the New Black that rival Hollywood theatrical releases.

Will its popularity last? Considering the growing number of competitors in the video streaming scene, it’s possible that every major network will begin launching their own platforms and pull out of their partnership with Netflix, leaving the latter with a scarcer catalogue of entertainment options. But Netflix still produces an immense number of its own Originals.

If you’re looking for a single-user personal account, its $11.98 monthly fee isn’t the cheapest. Your best bet would be to invest in a Standard or Premium subscription, and split the cost with four other friends, so you’ll just have to fork out about $3.19 or $3.99 a month.

While Amazon Prime Video offers fewer entertainment options than its rivals, the quality of its catalogue remains top-notch. Viewers can expect gems like The Office, Parks and Recreation, Community, The Grand Tour as well as a slew of Amazon originals such as The Man in the High Castle, The Marvelous Mrs Maisel, and Fleabag.

Not to mention, at $2.99 a month, its subscription plan is the most affordable. Apart from its Amazon Video offerings, the membership also benefits frequent Amazon shoppers, offering free shipping on select items and early access to promotions.

HBO Go is an on-the-go streaming service, which is available through three operators (Singtel, StarHub, and meWATCH). It offers six HBO channels—HBO, HBO Signature, HBO Family, HBO Hits, Cinemax, and Red by HBO—without the need for you to get a cable TV subscription.

Indulge in cult classics such as Game of Thrones, Westworld, The Sopranos, and Big Little Lies, all of which can be downloaded onto your device and streamed on two screens at a time.

Its fees vary, based on the type of plan you sign up for. For Singtel subscribers with a Combo 6, 12, XO 78, or XO 108 plan, the first 24 months of your membership will be free. An ordinary, no-contract plan, on the other hand, will set you back $13.98 a month. As for its selection of shows, there’s a possibility that you might grow tired of the limited offerings very quickly.

If you’re more interested in binge-watching Korean dramas, consider Viu. Its basic tier can be accessed for free, although you won’t be enjoying the HD, ad-free experience. Opt for the Premium subscription for unlimited downloads and TV casting of a larger range of your favourite variety shows including Running Man and Little Forest.

While the free version only airs new episodes around 72 hours after the original telecast, the Premium tier brings them to you after about an eight-hour wait.

The highly anticipated, on-demand entertainment platform is available locally right now, with over 500 movies and 15,000 episodes you can watch until the cows come home.

While it is pricier than Amazon Prime Video and Apple TV+, you do get your money’s worth with the amount of content available on Disney+. There’s a slew of movies and shows from Marvel, Pixar, Star Wars and Fox that you can endlessly stream on Disney’s streaming platform.

Compared to Netflix and HBO Go, it might be a close call, but if you bite the bullet and take up Disney+ for a full year, the monthly cost is even lower than Netflix’s cheapest plan.

One huge advantage Disney+ has over Netflix is the absence of separate tiers for video quality and simultaneous streams. Every Disney+ subscriber can stream in 4K/HDR and is entitled to unlimited downloads — as long as you continue to pay.

In addition, Shopback is giving up to $16.50 cashback if you sign up for Disney+ via its app. A quick search on the website shows that this is only applicable for its app for now. There's also free Disney+ for a year if you’re a StarHub TV+, Broadband or Mobile+ user.

How do these streaming platforms compare against each other in terms of pricing? Take a look below:

Read these next:
Complete Guide to Disney+ in Singapore: Price, How To Get, Shows To Watch And More
5 Netflix Shows That Will Change Your View About Money
Netflix, Spotify, GrabFood, XBox: Best Credit Cards For Online Subscriptions
These Netflix Movies Will Save You From Financial Ruin
Is a Netflix Account in Singapore Worth the Money?