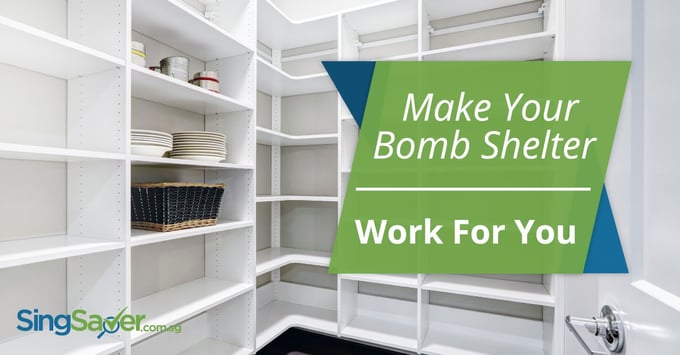 Chances are, your HDB flat has a steel-enforced bomb shelter somewhere within. Here are some creative ways to use it before threats of war become too real.

This article was first published on ezbuy.

If you’re a Singaporean, chances are you live in a Housing & Development Board (HDB) flat or know of someone who does. After all, according to the latest national census, more than 80% of Singapore’s population live in HDB flats. And you would have most likely seen an HDB built-in bomb shelter before or even have one in your own flat.

The Civil Defence Shelter Act, passed in 1998, requires a bomb shelter to be included in all homes of new residential developments. According to the Singapore Civil Defence Force, the bomb shelter or “the Household Shelter (HS) in a dwelling unit is typically the store cum pantry with its walls, floor and ceiling strengthened with increased thickness. The walls are set back by specified distances from the building exterior and the entrance to the HS is installed with an SCDF-approved light protective steel door. The HS gives protection to the shelterees against weapon effects such as blast and fragments during an emergency.”

As much as an eyesore it may seem to be, bomb shelters are actually important – especially when the world is an increasingly unsafe place with threats of war declared (yes, North Korea, we’re looking at you). Here at ezbuy, we recommend five ways to make the most out of your bomb shelter. 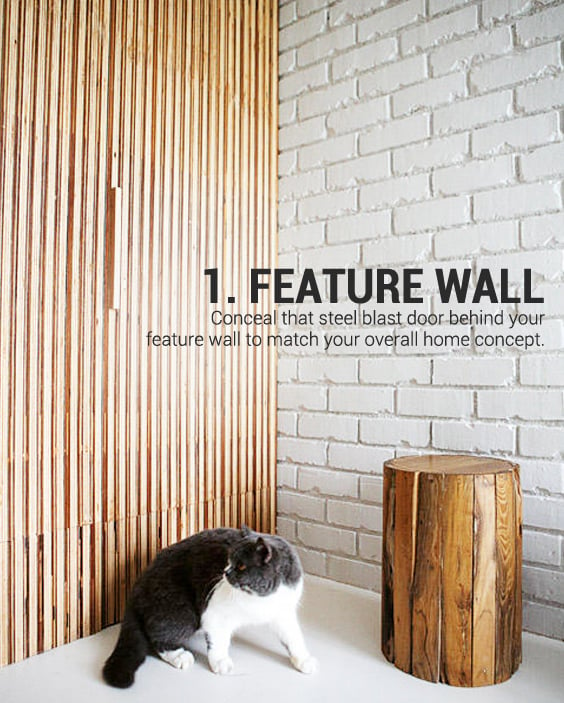 By building a feature wall, that is in line with the theme of your home, in front of the entrance to your bomb shelter, you will be able to conceal your bomb shelter effectively and still match your overall home décor. 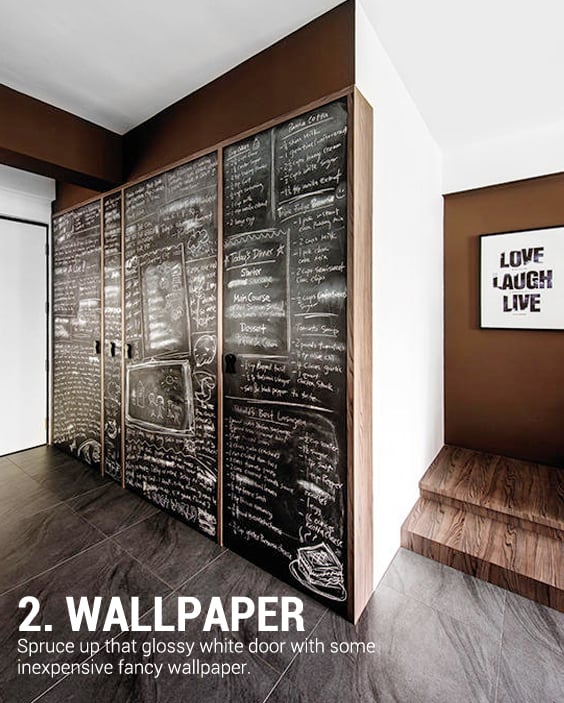 Jazz up the chunky white bomb shelter door with some inexpensive fancy wallpaper. With so many types of wallpaper to choose from, you’ll be spoilt for choice! Choose a dry-erase wallpaper so you can convert the wall and door to your bomb shelter into a space where you can jot down grocery shopping lists, menus for the week and more! 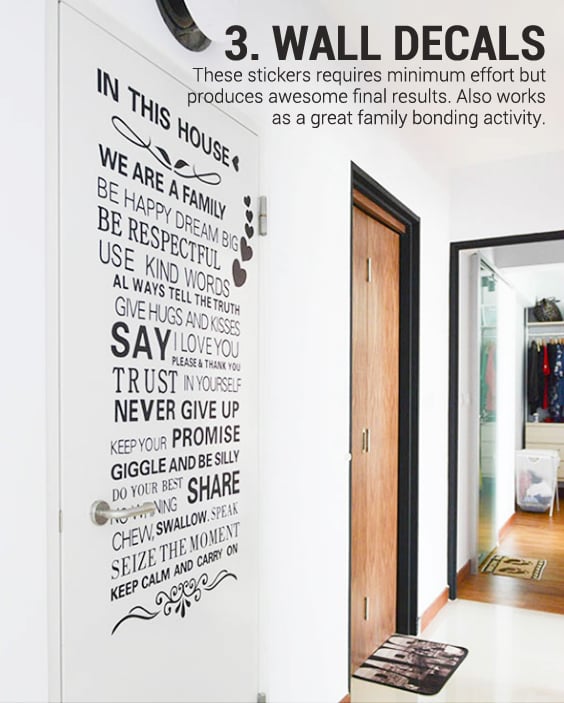 If you have kids, this will be an ideal option! Not only can you stick on these wall decals together with your kids as a great family bonding activity, these wall decals are also fuss-free and easy to maintain – making it a kid-friendly choice. Plus, you wouldn’t be worried if your little ones happen to touch the door to the bomb shelter, knowing that these stickers are not toxic unlike certain types of paints. 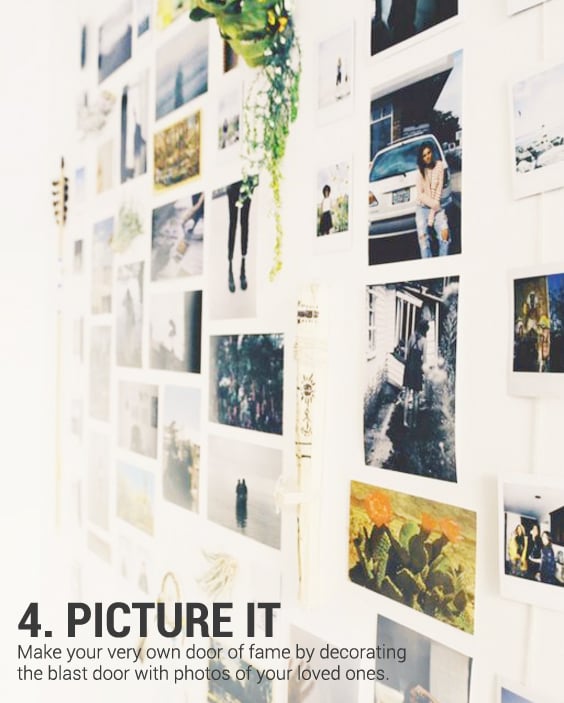 For families with the habit of developing films and printing photographs out, why not consider turning the bomb shelter door into your very own door of fame by decorating it with pictures of your loved ones? It’s simple to install and it’s aesthetically pleasing to the eye. Share your happy moments with visitors to your home when they take a look at your door of fame. 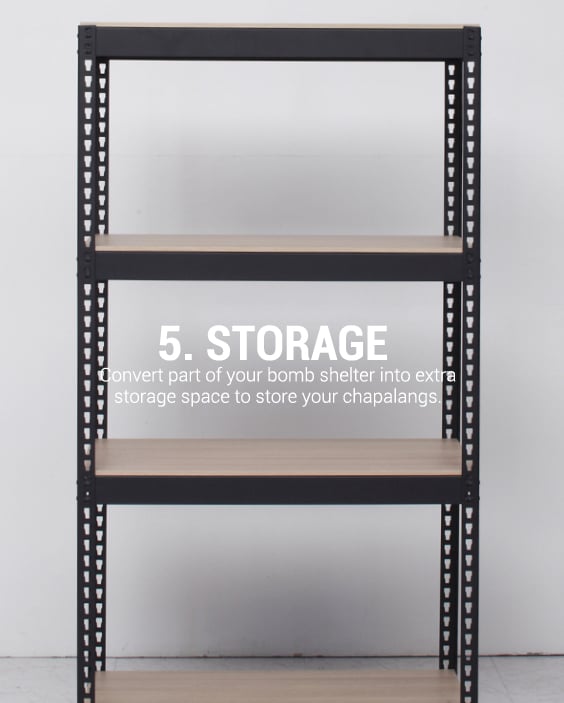 Utilise It for Storage

The average household will have its fair share of barang-barang(s). What should you do with it? Well, we suggest converting a part of your bomb shelter into extra storage space to store all of that. But make sure these items are easily removable by using shelving units on castor wheels – *touch wood* you wouldn’t want to face the situation of needing to use the bomb shelter during a time of emergency to seek refuge in but can’t due to all the stuff you throw in there.

Tip: use an online shopping credit card like the Standard Chartered SingPost Platinum Card to get up to 7% rebates on your purchases at ezbuy.

5 Ways the Contractor You Hired Can Screw You Over

Beware the Unexpected Costs of Being a Landlord in Singapore