Gold-leaf soft serve is the only way to eat ice cream, and all other foods are inferior.

When it comes to food, people like to say things such as “oh it’s all subjective”, and “just because it’s expensive that doesn’t make it better”.

Well those people probably eat well-done steaks, or think Rose is a real wine (that is, they’re objectively wrong). I take more Instagram pictures of food than the CIA takes of potential terrorists, so I’m authorised to tell you that the 24-karat gold leaf soft-serve is objectively superior to all foods.

What is this Gold-Leaf Ice Cream?

What is this new ice-cream, and why does it look like something you’d buy from a pawn shop?

This ice-cream was originally from around Kyoto, at a place called Kinkakuji (the Golden Pavilion). Kinkakuji is a Zen temple, and two entire floors are completely covered in 105 pounds of gold leaf.

As you know, Zen is all about minimalism and the rejection of materialism, so I imagine this is all due to a miscommunication with an interior designer at some point (Zen? Oh no, Tanaka-san, I thought you said you wanted a building that would be about YEN).

Anyway, this tourist hotspot is graced by what is objectively the most superior food in the world: soft-serve ice-cream wrapped in 24-karat gold foil. And now, it’s come to Singapore.

For the mere price of around S$11 per cone, we too can indulge in the only form of jewellery that somehow manages to contribute to diabetes rates. Here’s why it’s objectively the best food, and why you should buy it right now.

When other foods include gold foil, it’s often low quality, fake gold. It’s just coloured sugar or something. But when you eat 24 karat gold foil, you can really taste the difference. I mean, this ice-cream is not 22  or even 23 karat, but a whopping 24.

As millions of people enjoy the metallic tang of, say, sucking on the wrapper of a Ferrero Rocher, or licking their wedding ring to really gauge the quality, everyone can surely appreciate the difference 24 karat gold foil makes.

It’s totally different from, say, gold icing that you can make in your own kitchen at a fraction of the cost. Or that you can buy 10 grams of for S$8. (10 grams, incidentally, will cover enough dessert to make your urine technically count as an imported Soda).

This ice-cream is coated in real 24 karat gold, which clearly makes it far superior in taste and appearance. Definitely worth paying for.

Sure, taste is good and all, but what really matters is how your food looks on Instagram. I could talk about how texture and flavour are a big deal in soft-serves, because you don’t want it to taste too icy and watery, or to be too sweet to cover the flavours. But that would all be a waste of time.

You see, the most important function of a good dessert is that it expresses how little you fear poverty, and that really, prices are a thing for your servants to handle.

This is the future of food: not paying for quality or culinary skill, but forking over good money to parade your food pictures like they’re a shady studio’s underpaid model.

This is why places like our hawker centres are dying: because they do silly things, like focussing on substance and taste, instead of making their food beautiful for Instagram. 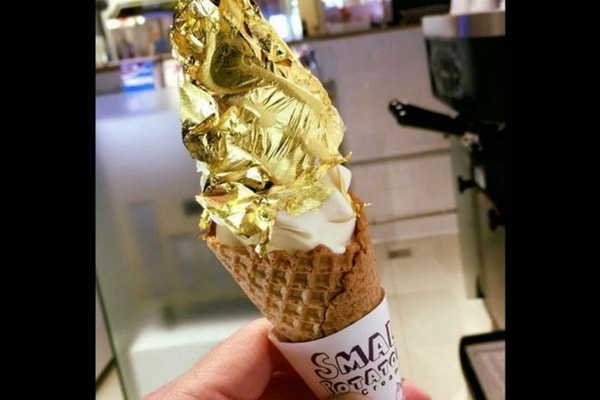 It Makes You the “Special Sauce”

Top dishes always have some kind of “secret ingredient” or “special sauce”. Take, for example, the Ramly Burger: despite treating meat so badly it should still count as animal abuse, Worcestershire sauce keeps it in hot demand at pasar malams.

Well when it comes to an S$11+ lump of sugar in a cone, there’s only one thing that makes it special (even more so than the gold foil). Yes, it’s “special sauce” is you.

When you willingly fork out 10 times the price of something you could otherwise buy at McDonald’s, you’ll instantly be able to taste how much better it is.

Things that are limited edition are always better than things that are not. Don’t try to convince me otherwise; we live in a world where people pay more for gold than for oxygen.

This Kinkaku soft serve will only be around for a short time, which is why it’s more valuable than other soft serves. If you don’t buy it now, you could miss out on a crucial life experience.

Who knows? Eating this could be the experience that inspires you to quit smoking, or it could give you your very own revolutionary idea to turn a stupid idea into the latest money-making fad. (I sure had an idea like that, when I looked at this ice-cream).

So hurry and buy it now! Because if there’s one instinct that’s never failed any of us in life, it’s spending money for fear of missing out.